Difference between revisions of "New Cambria" 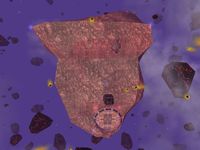 New Cambria was a remote system in Bretonia that suddenly entered the Jump Hole network in early 818 A.S. It was surveyed very little, being only known to have jump holes to New Anglia and Londonderry. All survey teams were lost when the jump holes collapsed to it in 818 A.S. Since then, it is unknown what condition the system is in due to lack of routes leading to it and its sister system, New Anglia.