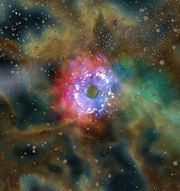 Jump Hole to Hamburg located within the Ruhrfeld in New Berlin

Magnetic and gravimetric readings are consistent with a Jump Hole -- a natural phenomenon that functions similar to a Jump Gate, though the hazards associated with traveling through a Jump Hole remain largely unknown. Like Jump Gates, Jump Holes are semi-permeable areas in real-space that have the tendency to breach the natural boundaries of linear time and space. Unlike Jump Gates, though, these anomalies occur naturally and so are both unpredictable and unstable. Traveling through Jump Holes is a risky proposition at best. Though some have been charted and, based on accounts from Ships that have accidentally encountered them, have had their exit points logged, just as many Ships have never been heard of again. It is believed that these Ships were either crushed in the violent, cataclysmic vortex that lies outside the narrow corridor of a jump Tunnel, or were sent to a place far enough away to make communication or a return trip infeasible. In either case, those missing are presumed dead. Ageira Technologies and Deep Space Engineering urge all citizens to use the prescribed Trade Lanes and Jump Gates and to avoid all contact with Jump Holes.

Number of jump holes, which are scattered, vary in number from system to system, some having only one while others have several Jump Holes. Ageira Technologies claim that Jump Holes are unstable and thus dangerous to use. It might be just company Propaganda since it's a sole Manufacturer of a Jump Gate technology, which are man made equivalents of Jump Holes. Whatever they are dangerous or not they provide outlawed Factions or persons trying to avoid notice means to travel through the galaxy without risking being spotted or fired upon by the Jump Gate defenses.

New Jump Holes are located from time to time. Trying to find out a location of a Jump Hole is always risky business since they are usually located in uncharted space or otherwise dangerous areas, like inside Asteroid fields, volatile Gas Clouds, Mine Fields or radiation Belts. A location of a Jump Hole is a closely guarded secret among factions, since they are a life line for many pirating Factions for supplies to go through or providing a needy escape from authorities. One way to find out a location of a suspected Jump Hole is to follow the patrol routes to their point of convergence. Most of the outer rim Jump Holes have stationary defense platforms to make short work of those too nosy for their own good.

A one-way Jump Hole is a strange anomaly that is different from many regular Jump Holes. If someone enters it, he will be sent to the system that it leads too, but he will be unable to go back through the Jump Hole he just came from. 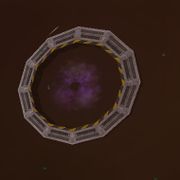 There are no much infos about this special tech. It was used by the MND to stabilized the Frankfurt-Thuringia Jump Hole. It seems to mix the normal Jump Holes with Jump Gate tech to avoid the problems of Jump Hole.