The sole Horus-class Super Dreadnought of the Order, Thebes is a state-of-the-art warship meant to serve as a mobile headquarters where the Osiris' hull and armament would prove insufficient to tip the odds of any conflict to The Order's favour. Fortuitously for the Omicron organization, its production was safely cloistered away until the vessel's unveiling. As the Core pushed for the final confrontation over Toledo, the Thebes achieved full combat readiness and was prepared prematurely for deployment before construction could have been finished and tests run. Arriving late to the Battle of Omicron Minor, encountering Nomads assaulting both fleets alike; The Order Overwatch ordered the evacuation of all personnel from Toledo and a full retreat to Omicron Epsilon.

The Thebes was on the other hand ordered to commence an emergency jump to Omicron Mu - a previously charted system known to be capable of sustaining human life. The untested jumpdrive broke down upon arrival, leaving the Thebes drifting at the arrival point. After many survivors from Toledo were unloaded onto the newly discovered Akabat, the Thebes was moored at a special drydock in Omicron Mu and tirelessly worked upon. With it finally combat ready again, it is considered to some amongst the organization as the "anchor" of the system, and a source of pride among its crews, technicians, and onlookers. 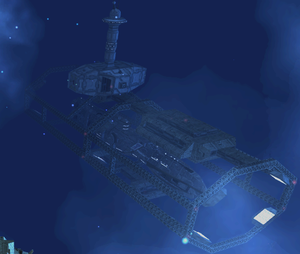