This is a player faction. For the affiliated NPC faction, see Mollys

At first glance, the origin of the Mollys seems shrouded, but the political undercurrents that lead to the current state of Dublin can be seen as early as 750 A.S. The mining revolts of 752 and subsequent attempts by the BAF and BPA to pacify the region only hardened the resolve of the embryonic faction, leaving them with a burning determination to free Dublin from Bretonian control and corporate manipulation. The advent of the Molly-Rogue pact a short while later allowed them access to the latter group's shipbuilding experience, and together they collaborated on a number of projects, including the Z-9000 Barghest, and culminating in the Scylla. After locating a system--which they deemed Londonderry--to call home, the fledgling Mollys began to operate towards the liberation of Dublin in earnest. Due to the small nature of the organization, open war was out of the question, and instead they focus on lightning raids against convoys and poorly-defended military assets.

After a Corsair fleet decimated the Mollys near the planet Cork, a new objective came into view. Not only would the Mollys continue to work towards freeing their homeland, now they also had their dead to avenge. To this day, Corsairs and Mollys clash in the Omegas, leaving broken ships and broken lives on either side.

Bastard - Fresh meat. The recruits fly cheap ships and drink even cheaper alcohol. Their goal is to fly interference for the Rookies of the Mollys, and to free up valuable assets from standard patrol duty. ~ Flys Hyena + Bactrian + Werewolf

Rookie - They went from the frying pan into the fire and came out of it smelling like smoke, but still alive. These pilots have survived the harrowing Molly stage of their career and almost to a man. ~ Flys All Minus Gunboat + Scylla

Ace - Sometimes in life a man does something incredible. For some, it's landing the dream job. For the Mollys, it's usually something done while inebriated and shouting insults at Bretonia. The Aces, determined to one-up each other, have done nothing short of the fantastic. Only the best of the Bretonian Armed Forces pilots can compare to them. ~ Flys All minus Scylla

Verteran - Their names are whispered in fear among those who even what they are capable of. ~ Flys All

Vice Governor - Like a Governor, but focuses more on administrative tasks. Filling in for the Governor when she/he is out on business, the Vice Governor is a person to be reckoned with among the Mollys, posessing vast influence on day-to-day operations.

Governor - The big cheese. The head honcho. Any way you slice it, this person runs it. From the largest smugging convoy to the smallest bribe, the Governor is the one who makes it all happen.

The Mollys have a large variety of bases and stations around Bretonia. They have a secured system called Londonderry which serves as their personal fortification. (Courtesy of the Molly Council Wiki Page) 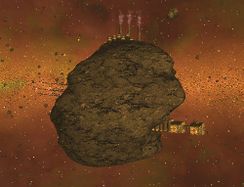 During the height of the Dublin Gold rush, the field manager in charge of the primary large-scale corporate operation in the system was a ruthless tyrant named Sir Edmund Graves. The miners were pushed harder to cover up the shortfall in shipments back to New London, and the situation became critical. The Founders Day Revolt, as it came to be known, occurred on the annual national Bretonian holiday in 752 AS that commemorated the original founding of New London centuries before. The workers mutinied, executed Graves and his compatriots, and took control of the mining ships Endeavor and Glorious. The Bretonian military response was swift and furious. Bretonian gunboats arrived shortly, and in the ensuing battle, destroyed the Endeavor and its mutineers. Despite few tangible victories in their effort to free the Dublin system from control of the Bretonian government, they've still managed to fight a vastly superior military force to a near standstill. Arranmore is one of first Molly made base.

Arranmore serves still as the core of old Molly ideals, the fight for freedom.

After the destruction on Planet Cork by a Corsair invasion force, the majority of Mollys on the planet moved to Coleraine base built inside a huge asteroid. Molly Republic High Command and the bulk of all Molly forces lived on this station. It was the brainchild of Dr. Patrick O'Carrol. Since the completion of Kilrea, the overpopulated station was relieved and it has now apparantly been moved elsewhere in the nebula it sits in. It is now more of a last resort for the Mollys, should anyone overrun their bases outside of Londonderry or inside.

Foyle is the secondary Molly ship production facility where they assemble the Rogue Gunboats and the mighty Scylla after getting the parts shipped in from their allies. Several well-known ship designers from Bretonia who are believed to have defected to the Molly's may be conducting their work here. The station has been the subject of debate by several of the new Molly Council, with ideas of turning it into a smaller snub craft production facility being favoured.

Since its independence from Bretonia has been declared, the Molly's no longer had access to the smelters and refineries of planet Leeds. Molly gold was beginning to find major markets throughout Sirius, and demand was higher than Mahgerfelt station could meet. Profits are higher than anyone could have imagined, and Garvagh Station is a fine example of that. It is one of the largest known industrial facilities in the galaxy, producing large numbers of gold bars. This station is crucial to the survival of Molly war efforts in Dublin.

Following the destruction of all life on Planet Cork by the Corsairs, all survivors fled to nearby Coleraine base, the Military HQ of the Molly freedom movement. Coleraine was not outfitted to maintain so many refugee's, and plans for a civilian station were quickly drawn up. The station was named Kilrea, after Shamus Kilrea, the man who helped to evacuate thousands of refugees from Cork's surface just before the orbital bombardment commenced. The inhospitable and volatile world of Cork, which Kilrea orbits, is a reminder to all residents of Kilrea station that evil lurks in the hearts of men, and what that evil is capable of. It is a driving force, for all Mollys, man, woman, and child to never let such a catastrophe ever happen again. 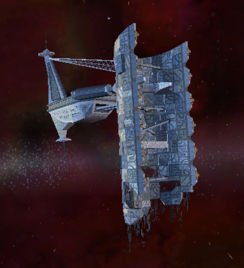 Belfast has had a grim and bitter past. Built in 776 S.S, the facility has been mining resources from the crust of the nearby planet Middlesbrough. The Mollys didn't take too kindly to the new trade lane and manufacturing base infringing on their territory, especially with it dangerously close to Mull Base, and started launching attacks against it. Molly agents secretly started applying for and receiving jobs aboard Belfast, ready for the day when they would claim it for their own.

In 795 A.S., the Mollys struck. They launched an all-out offensive using all of their limited gunboats and most of their heavy fighter craft. They broke out from the nearby barrier nebula and opened fire on Belfast's defense turrets, disabling them. While the battle between the Bretonia police and the Molly fighters raged outside, the Molly undercover agents onboard Belfast moved quickly. Pulling concealed weapons free they turned on their management, slaughtering them and throwing their bodies out of the airlocks. Belfast was theirs.

With her smelters working at even 60% capacity, the facility can create more than enough materials for the Mollys to construct more components and ships. Shortly after the hostile takeover, the Bretonians attempted to retrieve their lost station, but the Mollys fought hard to keep it. Along with several newly constructed weapon platforms and heavy fighter cover, they drove back the Bretonian forces twice.

After the loss of their second destroyer and the complete destruction of the Battleship Leicester with all hands lost, the Armed Forces finally admitted defeat. However they ordered the Battleship Ark Royal to keep an eye on Belfast although since the Kusari navy captured Glasgow Outpost, it is likely that the Ark Royal will soon be sent to the frontlines against Kusari. 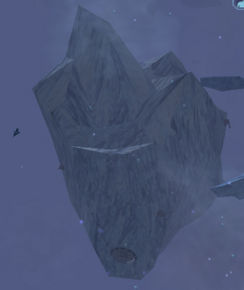 Discovered in 794 A.S. by Molly scouts returning from a reconnaissance mission into Omega 5, Lisburn Rock was the perfect location to construct a fortress for basing Molly forces at, from which they would be able to combat Corsair incursion into Bretonia. A huge rock asteroid located on the edges of the Keswick ice cloud in Cambridge, the interior was hollowed out and construction was eventually completed in 804 A.S.

Raiding parties are often launched from the base on the nearby trade lanes, and with the convenient location of the Omega 3 Jump Hole, supplies from Freeport 1 are fairly easy to obtain, as well as providing the Mollys with a place to dispose of stolen goods. The Corsairs often strike across the Cambridge Line from Omega-5, and while the Mollys don't hold much love for the Bretonia Armed Forces, they consider Bretonia to be their turf and Lisburn Rocks is their frontline defense against the invading Corsair squadrons.

Mull base was created by the Mollys in 772 A.S., shortly after the jump hole from the Chester system was discovered. They used it to launch attacks against the Belfast Production Facility, before taking it over in a daring raid. The base is heavily fortified, and has good trade relations with Arranmore Base in Dublin, from whom Mull gets a lot of its supplies and recruits. The Barrier Nebula was chosen because of its excellent sensor disabling properties, and the large asteroids make it very difficult for the Bretonia Armed Forces to explore in any great detail. Mull base is also the key nuclear weapons manufacturing centre for the Mollys, using plutonium smuggled in from Kusari and the Sigma systems. The Bretonian authorities have tried for years to find Mull, as for obvious reasons they do not like the idea of nuclear weapons in the hands of terrorists, but all attempts to find it have so far met with failure.

It is rumoured to be a nuclear production facility. 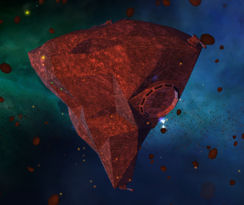 Tayport is a new Molly base recently constructed in the Dundee system. It is rumored that Bretonia Armed Forces tolerated the Molly presence in the system in exchange for guarantees that the Mollys would stay away from any military or support ships belonging to the Armed Forces.