The Omega-41 fragment field is all that remains of the system's planets following the planetary nova which occurred shortly before the arrival of humans in the Sirius sector.

The Neutron Star found at the center of Omega-41 is the most commonly seen one in Sirius, due to the many system connections present. It is one of only 2 known to emit visible radiation, a characteristic it shares with a Neutron Star in a nearby system. It also has a visible ring system, a distinction that only the Neutron Star in Puerto Rico also has.

The Neutron Star present was created long before humans discovered Omega-41; When the star at the center of the system went supernova, it shattered all of the planets in the system into a massive asteroid field, and caused the star to collapse into the Stellar Remnant seen today. The left over system is constantly bathed in radiation from the Neutron Star, with only the Planetary Fragments providing protection.

A clearing of debris exists in close proximity to the Neutron Star, however entering this area is not recommended due to the intense radiation and powerful magnetic and gravitational field of the object. 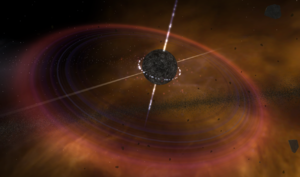