Jason was born on planet Toledo, to two Order agents, defectors from their respective houses of Liberty and Bretonia. His mother was an agent in the Liberty Security Force, before she was convinced to join the Order. His father, was a technician formerly in the service of "Her Majesty's Royal Fleet" but defected to join the Order due to some unknown reasons. He was there in the early stages of the Order, a tough time for a man, let alone for a child. He was born alongside his twin brother Brandon, who was separated from him after his mother left the Order, prior to the outbreak of the Nomad War, taking Brandon with her.

When the heavy part of the infamous Nomad War started, Jason was only 9 years old, and could not understand for most part why the people he liked and knew kept going out in space and never returning. When the Nomads assault on Toledo was launched, Jason was evacuated to a special Liberty Gunboat, which his mother used to own before leaving the Order. The Gunship was piloted by his father, and was going further away from the Osiris and the Order assault force which aimed to destroy the Nomads in Major once and for all. His father was instructed to do so, for he was in charge not only to transport Jason, but most of the other children that were evacuated from Toledo...

When it was all finally done, the gunship returned to the wasted Toledo, to find what's left of the Order forces being celebrated as heroes and saviors of humanity. They celebrated day and night and started to restore their old home and remain ever vigilant to the continuous alien threat. Jason and his father moved to a smaller but again fully preserved Order base where his father could continue his research and where Jason would get his Order pilot training... 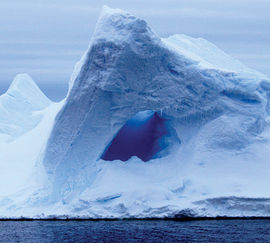 The Cave in which Jason took refuge while he was stranded on the far side of Toledo..

Jason finished the usual training with ease as if he was meant to do it all his life, covering basic close quarters combat and survival. For further training he was issued a personal trainer, an old friend of his father. He was supposed to help him cover the basic flight techniques using an old Anubis, flying far away from Order settlements and bases over the ice wastelands of Toledo. They were going rather well, just until one of the ships engines lost power and systems shut down, making the ship spiral violently towards the ground.

The ship crashed too far away to make any form of communication, and sadly his trainer broke his neck during the fall and died before instructing how to deal with this. Young and inexperienced, Jason was left to fend for himself and survive in the barren ice lands of Toledo. Luckily for him, nearby was a cave with a hot spring deep inside it, and only due to that Jason did not die from cold. He salvaged what he could from the ship and set up some communication devices to emit a distress signal that could be picked up if anyone got close. All that he found on the ship was useful, ranging from first aid kits to sharp pieces of metal.

Months passed, and no help arrived, he was still alone, living only out of small mammal creatures he hunted for food, and hiding from all sorts of larger predators. The line between life and death was thin there, and it right there where his survival training was put to best use and luckily he had learned his lessons well. Finally, a small terrain vessel approached the site of his refuge and picked up the signal, but obviously ignored it from some reason. Jason had to run and catch up with the vessel. He ran fast even though he was exhausted and underfed seeing it as his chance of rescue. When he was finally spotted, much to the vessel's driver surprise, he was taken back to Cape Hope, to his father who almost decided to proclaim him dead...

Jason then continued his training and in 810 A.S he became an officer aboard an Osiris Class Vessel, the OCV-Khepri. 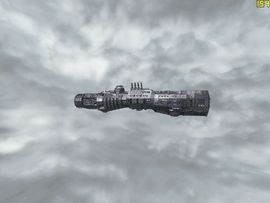 The new next generation Osiris battleship, the OCV-Khepri conducting an exploration mission somewhere deep in the uncharted parts of the Barrier Nebula.

When Jason was assigned to the OCV-Khepri, the captain of the ship Maximilian Richardson, one of the heroes of the Nomad War, and Jason's Godfather. With all the ties pulled and Jason's training experiences, he was assigned as one of the two deputy chiefs of security. Not much happened aboard the Khepri, not much for a security officer to do. Instead of patrolling the ship all the time, Jason liked to spend time in the ship bar with the other deputy, Martin Wagner. Jason liked Wagner, because he was one of those that actually didn't judge and accuse him of being favored and benefited by his connection to the ship captain, which was of course not true.

During his service Jason witnessed that the Khepri was more than capable to deal with the ever lasting alien threats that plague the uncharted Omicrons, where the Khepri usually operated. He saw it rip through several Marduk class nomads but nothing could prepare him or the crew for what the Nomad Worlds prepared for them next.

It was supposed to be a regular recon mission that would determine what caused the sensors to malfunction within the confines of the Omicron 92 system and the space beyond. The OCV-Khepri jumped through the hole, and the crew started to make calculations. The sweep revealed that a few "blank" spots within the system existed, where the navigational devices could function and from there, all calculations pointed out to a neighboring system deep inside the Edge Nebula that covered that patch of space entirely. The Khepri set course to that system and the journey took several days to complete, due to the lack of stable jump holes. When the ship actually arrived there, the sensors indicated that this system was entirely covered with usual asteroids and nebula that was commonly found throughout the edge worlds, except that it had a large spherical void inside the center of the system, where asteroids were absent. The Khepri set it's course to the sphere, finding that this part of space was laden with Nomad patrols, but to the crew's surprise, all of them were displaying erratic behavior, as if all of their usual sanity has been lost and their connection to the mindshare has been cut off.

The Nomads could not concentrate on what was going on around them and the smaller ones would often bump into the bigger ones, resembling the behavior of moths that circle and collide with an artificial light source at night. The crew was puzzled with this behavior, but all that they could find indicated that there had to be some kind of an anomaly that made the Nomads act like this. When the ship finally reached the center of the system, they found out that the behavior of Nomads there was normal, which was bad news for the ship crew. Suddenly, a large nomad morph came into the range of the ship, resembling a Marduk, but it was larger in size, accompanied by two Nammu class nomad morphs. The battleship engaged into a fight with them, but it's fate was evident from the very beginning.

The crew started to panic as soon as the ship's systems started to fail and mass evacuation was ordered. All of the ships crew went fast for the life pods, but most of them were lost along the way when the ship's interior plating started to collapse, trapping those behind it. At the end only Jason and eleven other people made it to the life boats, managing to escape and leaving the dying ship behind them as the Nomads seemingly gained distance after disabling it...