Omicron Major is an extremely mysterious and uncharted system inaccessible by any means but experimental battleship technology and alien jumpgates. No map information has been formally compiled, but sights reported in the area by freelancer and hero of the Sirius Sector Edison Trent have given a limited degree of scanning information. The system itself is seemingly mostly a black void, and contains an astronomically large green gas cloud disguising a spherical Dom Kavash installation. This installation is a type known to humans as a Dyson sphere, it collects energy from the green sun within it.

A dull, brown planet that contained Nomad specimens found by Rheinland expeditionary forces about a month before the single-player campaign in 800 A.S. It contained a huge supply of Nomad and Dom'Kavash artifacts, but unfortunately in the process of acquiring these Rheinland personnel became possessed by the creatures, and started a trail of infection eventually leading up to Chancellor Niemann himself.

A large structure of unknown design that also serves as a power converter for the Nomad's and Dom' Kavash and a projector for the Sirius hypergate. When freelancer Edison Trent destroyed it's surrounding generators, he successfully activated the hypergate with his artifact and sent the majority of the Nomad fleet, including all known capital ships in the Sirius sector, to an unknown location out of harms way, likely a neighboring sector. 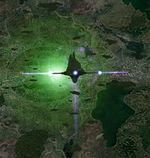