Feel free to kill me... many tried, everyone fallen. - Golanski to bounty hunters before battle.

Golanski is an Order Primary Fleet officer, former Zoner born on planet Crete. Recruited to Order by covert recruiter onboard Java Station. His duty in primary fleet began after the invitation from captain Eriksson Ravenov.

Golanski was sometimes mistaken as Corsair, due to the place from where he was born. But his parents were Zoners of not clear descendant, possible similar to East European colonists from the overloaded Hispania that later usualy mixed into other houses or SCRA. He spent his early life in Omicrons. He lived mainly on Freeport 9, being trained in piloting a fighter when he was 16. His life was hard as the Edge Worlds offer a relative safe following idea stay away from any troubles.

Freeport 9, to which station Golanski affilates himself to.

Finaly Omicrons were too small for him. In 817 A.S. after being captured by Das Wilde and by miracle avoiding infection, he decided to start a freelancer career in house core space. He piloted the Charon and the Kingfisher fighters keeping low profile. During his visit on Java Station he met an Order recruiter who took him to Omicron Minor. Under the callsign 'Omicron' he worked in secondary fleet, later under command of colonel Kell Tainer. Then he was introduced slowly to the inteligence division (Called the Wedjat), becoming a prospective operative. He signed up for primary fleet after his friend, Chris Leigh quickly reaching officer status in the fleet. He is very proud of it, soon joining science division when he heared that they need experienced pilot for research team, objective was secret but after the mission he stayed serving as liason officer and explorer.

Live in The Order changed him, but not many people remember or knows that. He slowly became more ambitious, xeno-phobic and mad as his wingmans describe him. He still keeps on good terms with Zoners, particulary The Omicroners and value independent groups like GMG. His aversion to house goverments is known but so far he didn't took any actions against with exception of his battles within Alaska system as part of respond missions concerning Liberty Navy and LSF hostilities in Omicron sector and open dissaprove of Kusari recent affairs. He is known to be loyal and friendly specialy to his crewmembers and officers serving together with him. His one of best actions included saving cruiser CV-Spectre from destruction due to massive Nomad assault, including two Nomad 'guardians'.

Colonel Golanski's fighter, acquired by his private deal with GMG and heavily modified in Evora shipyard this unique snub craft serves as Golanski main fighter. Observing BHG fighters like Sea Serpent, Nomad 'Labraid' type and increasing amounts of Kusarian military grade ships getting in hands of infectees Golanski decided to find the appropriate vessel to deal with situation. The Karasu fit the bill. While delivering punch comparable to very heavy fighters, its agility stands on level of some light fighters. Ship lost on Toledo. 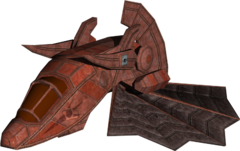 Gift from Blood Dragon shogunate, first Katana flown in The Order. Dragons known for guarding their technology strictly, gave out only very limited numbers of their ships. Its exotic design and red painted hull is signature of Admiral within Order space and beyond, wherever Overwatch duty takes.

Formerly known as CV-Pyramid, that Jinkusu served fleet admiral Lee Brandon's as a capital ship and Order flagship, it was forgotten and left in Omicron-100 a year ago. On the order of Rear Admiral Golanski, ship was re-commissioned to active service and receiving necessary renovation it returned to action renamed to a CV-Inquisitor. It is more like a flying city than a proper warship but it is well equipped to defend itself. Production lines on board allow supplies ranging from snub craft to ammunition, and bio domes serve as powerful life-support systems for the entirety of the giant vessel.