Kaspar Tadeus Meisnerr, (born November 11th, 776 A.S.) is a known revolutionary cell leader of the Red Hessian movement, and one of the key figures within the Rheinland Revolutionary Alliance. Within the Rheinland core he is most known for several publicised claims of vigilantism and anti-government terrorist activities within the boundaries of Rheinland, all of which were aimed at prominent corporate or government administrators. He is also suspected by the Rheinland law to be the leader behind the notorious Red Hessian Army group.

Kaspar Meisnerr was born on Planet Hamburg to Heike and Markus Meisnerr, both of whom lived their lives out of a small fortune they attained as shareholders of Kruger Minerals after Kruger's brief stock market success in early 770 A.S. In his early years Meisnerr lived with his parents on the very border between the slum districts and the upper class living area, which helped him shape his first ideas on the degrees of injustice within Rheinland. He completed his secondary education at the Hamburg-Ost Technical High School before enrolling for the Hindenburg University on Planet New Berlin and majoring in Military History. He was noted for having leftist political tendencies, including publicly criticising the policies of the Rheinland National Party at one of their election rallies in 803 A.S. after a particularly dramatic and radical speech by one of its leaders - an act that almost led to a riot within the crowd he was standing in.

Meisnerr graduated and shortly after was hired by Kruger Minerals as a security advisor in 804 A.S., remaining employed for two years before being declared a casualty in 806 A.S. after the Kruger convoy with him on board was attacked by a Corsair raiding party in Omega-7. His body was mysteriously never recovered during the wreck inspection, and he himself disappeared from the grid completely until 810 A.S. when he resurfaced in the middle of a number of highly successful terrorist hits against Daumann and Kruger executive shuttles in the Dresden and Frankfurt systems. A disc containing a video with him claiming responsibility for organising the hits was recovered by Rheinland Police agents on October 11th, 810 A.S. and contained his admittance of involvement as well as his statement of intent toward the Rheinland government.

An excerpt from the statement as recorded from the disc:

"(...) We have grown tired and weary of listening to your lies. You claim to run a government for all the people, and yet the only ones who are treated with respect and dignity are the rich and the powerful. The same rich and powerful who consistently destroy Rheinland piece by piece, the same rich and powerful who sell out our industries and exploit our people to their very limits without giving anything in return. Change is necessary, and for that change to come we will show everyone that neither Daumann nor Kruger nor the high echelons of Rheinland's own society are untouchable. Both will fold and make way for a real people's government."

Kaspar Meisnerr was proclaimed a highly wanted fugitive by the Rheinland Federal Police in late 810 A.S. and remains at large so far, despite both an arrest warrant and a hefty price on his head.

Involvement in the Red Hessians

Meisnerr is believed to have joined the Red Hessian movement in 806 A.S. shortly after the declaration of his supposed death. His escape pod is theorised to have been picked up by Hessian raiders roaming the Omega-7 system, long before Kruger clean-up crews could arrive. Impressed into the ranks of the revolutionaries, he was assigned to Freital as a novice raider, which led him to develop a steady hatred for Daumann after witnessing the treatment and shoddy mining operations conducted in the Omega-11 system purely to feed the corporation with diamonds. He eventually became a raider commander after a string of successful shutdowns of Daumann mining ops within the system, and was assigned his own wing within Rheinland itself where he and the men under his command proceeded to carry out a series of high profile political assassinations against several unrelated corporate directors. 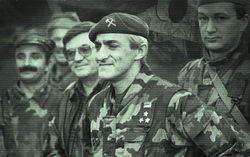 In late 811 A.S. Meisnerr was assigned to one of the first "strategically decisive" Red Hessian fleets in the Omega systems, which was hastily put together following the stabilisation of the Omega-47 jump hole in Omega-5 and the resulting opening of a second front against the Corsairs by the Hessians. Originally placed as a wing leader for the secondary attack group, he was later field promoted to acting brigade commander following the death in action of one of the high profile Red Hessian admirals during the Battle for Casablanca. He was then able to display his leadership abilities by successfully surrounding the Corsair forces and taking out their heavy support so that the remainder of the Hessian fleet could emerge from behind Planet Rabat and begin a final assault on the Corsair base.

Following the successful takeover of Casablanca Base, Meisnerr was lauded as one of the up and coming "star" commanders within the movement, and was promoted to an officer position and recruited for the Red Hessian Army by Admiral Heinrich Kessler in 812 A.S. to serve as the core of his young cadre. He served under Kapitan Conrad Egon for the next two years, carrying out terrorist activities in Rheinland proper and laying the foundation for the well known propaganda war strategy of the then small Red Hessian Army group.

The abrupt death of Kessler in 815 A.S. and the consequent retirement of Egon left the Red Hessian Army with a power vacuum, as the high command of the group was undecided in who would become its next commander. The Red Hessian revolutionary council, fully aware of the problem, decided to appoint a new leader from the young officers of the RHA, and in early 816 A.S. Meisnerr was declared as the de facto commander in chief of the Red Hessian Army, and was promoted to the rank of Brigadegeneral.

Despite his long career in the field, Meisnerr is currently supervising administration and planning within the Red Hessian Army, in addition to being in charge of the grand strategy of the group. Due to the scope of his duties he is rarely seen in space, and generally remains on board Vogtland, coordinating RHA activity from his command centre.

Despite years of successful command, the recent loss of Casablanca has undermined faith in his command. Although he himself predicted Casablanca would be lost eventually, as it was a base that was impossible to hold, many in the Red Hessian Revolutionary Council nonetheless expected it to remain a Hessian outpost for years to come. Meisnerr expects to rebuild the lost trust by establishing a new facility in Omega-11 that would help fund new Hessian brigades.