Rheinland, or the Second Rheinland Empire (Zweite Rheinland Reich) - formerly the Federal Republic of Rheinland (Bundesrepublik Rheinland) - is the title of one of the four original houses in Sirius. It's territory extends from the fringes of the Crow Nebula to the yellow clouds of the Walker Nebula, with territorial claims deep inside the nebula itself. It is a parliamentary monarchy ruled by a Kaiser as head of state, while the Chancellor (Reichskanzler) is heading the government and the Reichstag (the Rheinland parliament) is the legislative branch. Rheinland sovereign territories border the systems of Sigma-13, Sigma-15, Omega-7, Zurich, Hudson and Bering 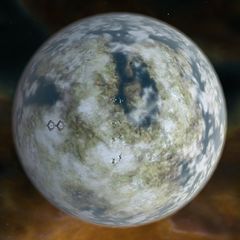 The Rheinland was originally the name of one of the five Alliance sleeper ships carrying colonists on their escape from the Solar System to the Sirius Sector. This single ship was containing several thousand refugees from the German part of the Alliance. The ship arrived in the Sirius sector in 2 A.S., surveying space for almost an entire year before finally landing on a cold planet that would be later christened New Berlin, the system it lied in receiving the same name. The conditions on the planet encouraged quick expansion, and Rheinland would soon begin building orbital facilities in the LaGrange points along the orbital path of New Berlin's moon, Potsdam. These facilities would later be connected to each other to form The Ring, which would be used to construct the first Rheinland ships as well as the necessary mining equipment to extract the minerals from the vast asteroid fields in the New Berlin system itself.

The Rheinlanders would quickly establish an emergency state for themselves, in order to rapidly conduct decisions during the process of colonization. This state, although composed of the Reichstag housing hundreds of representatives, would come to politically mimic the 19th century German Empire, thus developing a very patriotic and imperialist tendency. With the discovery of the Stuttgart and Dresden systems, Rheinland's food problems would be a past memory, while it's mining and shipbuilding industry would completely skyrocket, eventually producing a large, but resource consuming navy. This navy was widely regarded as able to singlehandedly conquer any other house in the sector, even by outside analysts. What Rheinland did not have was a cheap source of H-Fuel required to effectively maintain such a navy. A Kruger Minerals operation sent to Sigma-13 became a catalyst for the conflict, with Empress Leicht declaring the system Rheinland territory a few weeks afterwards. 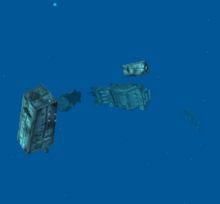 At first Rheinland's progress seemed decisive, as the Rheinland Imperial Navy took the system by storm, and took to establishing strong points around key gas mining facilities. However their dominance tactics quickly begun to prove ineffective against the fast guerrilla strikes of the GMG. This coupled with Kusari secretly backing the GMG and the low physical and sensor visibility Sigma-13 and the inability to progress further due to the diplomatic issues of breaching Kusari space put the Rheinland Navy at a massive disadvantage, and allowed the Guild to use their advantage of mobility to steadily pound away at the Rheinlanders until the defense lines began to collapse. The culmination of the war occurred in 668 A.S. as the last standing battlegroup of the Rheinland Military charged into Sigma-13 in an attempt to cause as much damage to the GMG as was possible. They were met by a sizable force of Guild fighters, which slowly reduced the entire fleet to rubble effectively ending the war in a decisive victory for the GMG. Rheinland was left battered and weak, it's economy and government collapsing in on itself. With it's industries surviving only due to a large loan given by Liberty, and the Rheinland currency suffering from extreme devaluation the house was on the brink of no less than open revolution.

On Von Rohe's Day, 672 A.S., Daumann mining stations in Dresden were seized and locked down by miners in a widespread general strike. Supplied by Bundschuh revolutionaries, the miners managed to hold out on the station for weeks before word finally got out to the rest of Rheinland. Three months later, sympathetic workers disable other Daumann facilities on Planet New Berlin, joining in the protests. With the industrial heart of the economy grinding to a halt, riots beginning to pop up all across Rheinland, the government is finally forced to give in. The Bundschuh movement is publically recognized, and it's representatives meet with the imperialists soon after. A period of tense negotiations follows, and a coalition government is eventually formed. In the same year the Kaiser would officially step down from his office, and the former empire would now become a federal republic.

The Federal Republic of Rheinland's Flag

Although with far more significance placed on the Reichstag, the Republic was still very dependent on a central position of power, in this case - a Chancellor. The eighth century would mostly be synonymous with the slow rebuilding of the Rheinland economy, as well as the eventual expulsion of the Bundschuh from the parliament, and the formation of several strong partisan and criminal movements that would plague the state with their activity for decades to come.

At the end of the eighth century, a group of Rheinland researchers in the Omicron systems would stumble upon a most extraordinary cache. Alien artifacts would be recovered by the hundreds, and transported back to the core worlds where they would be contested by both researchers and rich collectors. It would also be the beginning of the Nomad infestation in Rheinland, which would eventually reach Chancellor Niemann himself, and signal the beginning of the second large scale conflict in Sirius.

At the start of the ninth century the other three houses would be alarmed with the quick transition of the Rheinland republic into a de facto police state. Rheinland Military forces would be sighted as far as California and Tau-29, engaging both Liberty and Bretonian personnel seemingly at random. The war itself would begin in earnest at the time of the Rheinland invasion on Kusari, where almost half the rebuilt Rheinland navy had been infested by the Nomads and had attacked Honshu through Sigma-13.

During the large battle between the two fleets, the freelancer known as Edison Trent would decisively defeat the Nomads by cutting their source of power, thereby freeing the rest of Rheinland. The remaining infested ships in Kusari would withdraw, and would later become known as the Wilde.

In 813 A.S. Nikolaus Reinhardt attained power in Rheinland, liberalising economic laws in order to jump start the economy. New production plans would revive the military, while the state would once again fall into corporate influence, as their power slowly built back up. After the death of Rheinhardt a new Chancellor rose to power, Maxmillian Schulte who continued the policies of his predecessor.

The Rheinic Imperial coat of arms

The Empire consists of 8 star systems (New Berlin, Cologne, Thuringia, Frankfurt, Stuttgart, Dresden, Munich, Hamburg), six of those containing a habitable planet (New Berlin, Holstein, Stuttgart, Saarbrücken, Hamburg, Weimar). Each planet is under the direct supervision of a planetary governor, although still being officially controlled by the central Rheinland state.

As a result of the collapse of the federal republican system, many of Rhineland's military garrisons were either severely weakened or went straight to the Federal Rebels. As a result, four of the Rhenish systems are not under Empire control. Two of them are now controlled by the Federalists; these are Thuringia & Munich. The other two are Cologne & Dresden which are both controlled by the communistic Red Hessians

Rheinland Military units can be encountered in the Hudson, Sigma-15, Sigma-21 and Omega-7 systems, supervising trade and conducting patrols. The trade lanes in Omega-7 are broadcasting a Rheinland Police IFF, indicating a degree of direct state control, despite the still official independent status of the system. Claims in Sigma-13 have been withdrawn following the conclusion of the Eighty Years War.

When Sigma-21 was discovered the system was claimed by Rheinland algonside with Kusari and the GMG. A few month later the Kusari Rheinland War have started. At end Rheinland was more or less victory and now owns Sigma-15 and Sigma-21. Sigma-15 is already settled by the first people from Rheinland and a Jump Gate and Trade Lane Connection via Frankfurt is under construction by EFL.

Rheinland is formally a federal republic, wherein the Chancellor is the head of state and government, while the Reichstag is a collection of representatives from all the member planets, and rules with legislative power. As such, Rheinland's government is centralized around Planet New Berlin, with the most important decisions required to be ratified by the Chancellor before actually being put into effect.

Each system regarded as part of the Republic has a governor elected to oversee it's economy and morale. In the case of systems with a habitable planet, a governor is generally chosen from the local population, while systems with no population centers will be ruled by a government elected governor who will maintain office on New Berlin. Governors have the right to submit reforms to the Chancellor's office for consideration, thus giving him higher legislative power over the individual planets. Each governor however has direct control over all bases and planets in the system he has been assigned to.

Mannheim Station - The only source of H-Fuel for Rheinland

The economy of the Federal Republic can neither be classified as a free market nor a state controlled one. It revolves around the few major industrial and trade giants with their considerable stake in the industry, who are for the most part autonomous from the government, but also can be instructed by it to fulfill a particular plan. During Reinhardt, small businesses particularly suffered due to his policy of subsidies for corporations such as Republican Shipping and Kruger Minerals.

Rheinland is particularly reliant on the export of diamonds, with vast mining enterprises in Dresden and Omega-11. Daumann Heavy Construction also operates a number of stations in Omega-7 and Omega-3, mining copper, cobalt and hydrocarbons to fuel the shipbuilding industry. Leipzig Station is crucial to processing the minerals into high-temperature alloys. Niobium is also a key ingredient, and is imported from Kusari. Rheinland's territory does not incorporate any gaseous nebulae rich in H-Fuel components, and after the 80 Years War problems with obtaining H-Fuel have escalated. A large part of the Rheinland industry is dependent on Mannheim Station, which synthesizes H-Fuel from particles mined from the gas giant Heidelberg. The other part of the demand is satisfied by Kusari shipping, reselling H-Fuel obtained from Kishiro Technologies to Rheinland.

Rheinland is duly noted for its large and organised unlawful groups, primarily formed of revolutionary, political and reactionary factions. These factions are known to cooperate with each other on many occasions, tied together in their fight against the government. Aside from their political agenda, the Red Hessians and the Unioners are known to be involved in a large scale diamond smuggling operation.

There are four recognised unlawful factions in Rheinland:

Rheinland unlawfuls are known for their strong nationalism, frequently attacking hostile foreigners over possible military and police targets. Several incidents of military and unlawful cooperation against Corsair attacks have been noted, but the government is quick to dismiss such occurences as rumours and hearsay.