An arid world with little native vegitation, Planet Nottingham, originally named Planet Sprague, was marked for colonization and exploitation as early as 663 A.S., after BMM survey teams found indications of valuable minerals from orbit. When prospectors came to the surface however, they were stunned to find that the "mineral" deposits they had detected were actually ruins, predating the human arrival on Sprague by millenia. It didn't take the Xenoarcheologists from Cambridge long to identify the ruins as alien. Knowing full well the major boons that Liberty derived from uncovering alien ruins, the Bretonian government seized the ruins and declared the planet restricted to all but a small science team from Cambridge.

Most of the ruins were uncovered in a single excavation site. This site was destroyed during the Nomad war, along with the planet's docking ring. Sprague subsequently lay abandoned for a just under a decade, with no scientific value to the planet but it's restricted access preventing colonization. However, in the wake of the loss of Leeds, Bretonia authorised Refugee camps and agricultural industries to be set up on Sprague, and begin full colonization of the surface in earnest. A rough estimate now places Sprague’s population at almost 1.1 million people.

The new Trade Lane connecting Sprague to Freeport 1, and the rest of Sirius, has lead to an increase in shipping heading to and from Omega-3, bringing a much welcomed boost to the nearby houses of Bretonia and Rheinland. However, such a boon has drawn the attention of pirates eager to take advantage of the situation in New London to pillage any unfortunate trade ship caught without an escort. 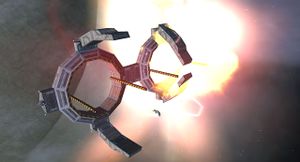 Destruction of the Docking Ring