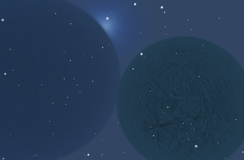 Minnesota has long be founded and claimed by the Liberty Government, but only recently has the House showed any interest in it's content or potential. Following the beginning of the conflict with Rheinland in Bering and Hudson, the Liberty forces saw an opportunity to outflank the Rheinland forces in Hamburg. Using Minnesota and New Hampshire as a back door they would gain easy access into Rheinland. They soon began to execute their plans to advance through the system chain toward Hamburg as expected. However the Rheinland forces already knew of the threat this chain of systems posed and were already entrenched in Bremen. Ever since the Liberty advance has been halted in New Hampshire at a stalemate with the Rheinland forces in Bremen.

The Liberty Navy has since turned it's eye back to the primary engagement in Bering and Hudson and is now trying controversial methods in gaining control over Planet Atka which are still underway. For now the Liberty forces involved in the advancement through Minnesota have been spread out along the three systems under Liberty control as a tactical trenching method, and are making a Rheinland counter-attack extremely difficult to contrive.

The Battleship Minneapolis was the last Battleship of the fleet to be assigned to a stationary location along the system chain, and now stands guard over the passage to Quebec and Texas.

Since the rushed advancement through Minnesota by the Liberty Navy, the system has attracted a lot of corporate attention. Universal Shipping have made themselves an established presence here. They have ensured the security of probing, exploration and construction operations within the system. Many issues have risen regarding the scale of Universal's involvement and dominance over this system and it's resources. However any questions regarding the firms potential expansion into the mining or terraforming industry remain unanswered.

Huge ice field that covers the whole Minnesota system. The only area that is free from ice are around the jump holes present in the system.