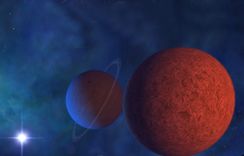 The existence of the Dundee system was initially kept secret by the Bretonian Armed Forces so as to provide a means to ambush the bulk of the Kusari Naval Forces fleet during The War of the Taus. The initial aim was to confront the fleet at Holman Outpost and use Planet Harris as a fall back position should the fleet be forced to withdraw. There they would lure the Kusari fleet where a secondary strike force would emerge from the nearby Dundee jump hole and close the trap. The intentions were to sever the head of the Kusari war effort in the Tau's and put a swift end to the conflict.

However the maneuver only served to reveal the location of the Bretonian's only trump card and back their military into a corner in Harris orbit. From that day Dundee became another theater of war. The Kusari Naval Forces frequently sent strike teams to sabotage Bretonian fortifications in order to damage supply lines to the Battleship Macduff stationed at Planet Harris. The war in Dundee was short lived with neither side winning sway over the system until the Gallic invasion began.

The ceasefire between Kusari and Bretonia upon the arrival of the Gallic Royal Navy put a temporary end to the conflict in Dundee. To the Mollys this was a golden opportunity to salvage what they could from downed vessels while installing a base in a very central, very powerful location for their liberation. For some time Orbital Spa & Cruise had intentions of stationing a liner in orbit of the attractive planet Crieff, but these plans were thwarted by the events to come.

It was not until Gallic attack groups emerged from Faroe and Lewis in Edinburgh that this theater of war was reopened. Once the hostilities in Leeds were concluded with the severance of the New London - Leeds jump connection, Dundee became the primary theater of war for the two military powers. With the Gallic forces holding sway over Edinburgh and Lewis and the Bretonians heavily fortified in Newcastle, both sides pour endless resources, vessels and men into Dundee every day to fight the war.

A large field of rock asteroids in Dundee system. This field is known to be the center of Molly activities in the system, and is never patrolled by Bretonia Armed Forces for reasons unknown.

A medium-sized field of rock asteroids.