The Sevilla-Battlegroup is a Maltese assault fleet that is part of the Maltesian Navy. The Battlegroup was created in 822 AS when many other ships were destoryed by the Gallic Royal Navy; this remaining parts created a small ship group leaded by the MNS Sevilla and figthed the royals back. The ships of the Sevilla-Battlegroup belongs to different Maltese fleets, but are all part of the Maltesian Tau Division. The main target of the Sevilla Battlegroup are all royal Gallics. These ships will not attack ships of any other member of the Anti Gallic Royal Alliance, except in selfdefence and will try to help those people's ships when attacked by royals. 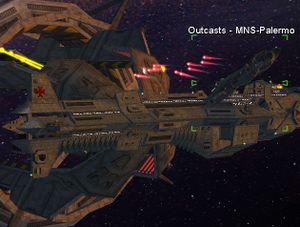 The Palermo was ordered by Isabella, when the group started to support the Bretonian embargo over the Taus. The Palermo should collect the goods of the shot gallic ships to support the Alliance. Malta has sent this new battle transporter from Atlantis Manufacturing and the Navy has elected Mario Naves as capitan.

The Milano is the oldest ship in the battlegroup. From 817 to 822 it served as a pirate in Liberty and secrued the cardamine trading or blackmailed money from traders by the help of Lane Hackers & Liberty Rogues. In 822 the ship was ordered to the Taus, when the GRN and also smaller factions like the Gaians had became even stronger. The Milano is allowed to keep on it piracy tactics against traders to fund the Navy's operations.

Roma and Fenice D'Oro next to each other

Destroyed: 818 AS in Leeds; but the wreck could be safed

The Roma was built in 818 and served in the Battle of Leeds; there the ship was destoryed but Mollies were able to safe the wreck after the chaos. The took it into a near cloud with other Maltesian shisp wrecks - but not like most the Roma was not just scrap. So the Roma was cut of in smaller pices and sent to Belfast, there Atlantis had taken the pices and shiped them back to Corsica, where the ship was rebuilt. The action needed 2 years - because of the occupation of Leeds the operation needed to be done very slowly. In 821 AS the ship was rebuilt by old and new parts, but it was not used to have more ships at the core space in case of an assault strike of Crayter, Core or - worst - the royal Navy. When the MNS-Toledo was destroyed by the republic KNF, when the Sevilla helped the IKN in their civil war, Isabella needed a new cruiser at her side. She has choosed Maria Naves, her leader of her interceptors, as new officer for this ship.

Maria Naves was the leader of Sevilla's interceptors for most times. She and her Gladius are most important to the squadrons of the battlegroup. In 821 AS Isabella raised Maria to the rank of a Lieutenant and the main leader of all squadrons of the battlegroup. In 825 AS she was choosen by Isabella as the new officer of the MNS Roma - the new cruiser at Sevilla's side. Since that time Maria is less seen in her Gladius but she still use it; especially when figthing in asteroid fields where larger ships are not as good as figthers.

Not much is known about Kenson and Misterich. The duo seems to come from Liberty or Rheinland but that is allmost everything we know about them. They started in 817 AS as pirates in Liberty, but they had not much success. Later some Lane Hackers found them and trained them up at Cochrane Depot. Both got a Stiletto for free and they finally got some real money. When the MNS Milano were around California it met the duo and invited them to follow the Milano to Bretonia. The duo finished their training later at Cape Wrath Base and got the Maltese citenzenship and raided for Malta in Newcastle by Molly support. In 818 AS the duo met the Sevilla first time after the final battle of Leeds. Isabella was looking for new pilots and the two searched for new adventures and stayed near the Sevilla.