This is a player faction. For the affiliated NPC faction, see Interspace Commerce

Interspace Commerce is one of the few corporations that has ability to deal in all four Sirius houses. Started as a banking company, Interspace understood that gaining profit and influence is faster by entering the shipping business. Advantage of having a station for each house in their capital system and one very strategical station in Okinawa led to one of the best infrastructures for reaching their aims - becomming #1 in shipping business. At this moment Interspace Commerce is by far one of the richest corporations in Sirius, trying to keep its neutrality towards all houses, however having Libertonian roots, it is met with quite unfriendly manner in Rheinland that led to various restrictions while visiting Rheinland.

History of Interspace Commerce starts back in 218 A.S, when Ageira Technologies and Deep Space Engineering founded company, capable of providing long term loans for parties, interested in hiring Ageira and DSE to build Jump Gates. Interspace was the only company, which performed high risk - high profit funding. Billions of credits were poured into constructing Jump Gates all across Sirius.

When Trade Lanes were invented in 280 A.S, Interspace got even more business to conduct. They loaned money to governments with contract, that those Trade Lanes will remain property of Interspace Commerce for time being, while still recieving percentages coming from clients' debts. However that did not lasted forever, as of 521 A.S. Interspace lost billions of profit due to Kusari and Rheinland nationalising their Trade Lane systems. In return, Interspace got rights to receive taxes from usage of Trade Lanes for next 200 years. That was still not even close to make up for losses. Bonn Station was constructed to oversee this transition and collection of taxes in Rheinland. Kusari at that time was hesitant to allow foreigners crowd their space, so Interspace was allowed to have offices on planet New Tokyo. Interspace Commerce started insuracing cargo shipments to get back on the track.

700 A.S. brought new inventions to Interspace's advantage. Ageira Technologies, in partnership with Interspace Commerce, created Universal Ship Identification system (USI), which allowed to track shipments. Many speculated it gave an edge over competitors, but no proof was provided. Interspace used this information to plan its own shipping business.

In 710 A.S. an amendment in the Sirius Commerce Pact was added, which allowed Interspace to establish a base in New Tokyo; Roppongi Station was built shortly after. While it was a great step for spreading influece and getting into new markets. However this move angered Kusari's population, especially the part with old and traditional views. Interspace had hard time properly conducting business in Kusari, but each decade it got more and more supporters, yet not enough to stop the passive aggression.

And in 718 A.S, date to celebrate 500th year of business, Interspace entered the market of cargo movement. While many speculated banking corporation won't be able to compete with major shipping companies, Interspace proved, what they are capable of. Interspace hired subcontractors first, not risking to take full responsibility of many possible infractions.

Transportation Division employs one of the best crews out there. Shippers are chosen from all corners across the Sirius once they submit an application to offices and after review they might be asked for interview. While Interspace Commerce is rather new in shipping business, the broad expansion it made already sets quite nice business for fulfilling market's demands all across the Sirius. That is the main factor why Interspace Commerce's Transportation Division is so successful in these times. One should always remember that Interspace Commerce will rather not get involved into wars due to weak relationship with Kusari and Rheinland. However some individuals simply has no moral for such orders and goes rogue while still hiding behind IC's banner, thus making a lot of trouble for Board of Directors to resolve. 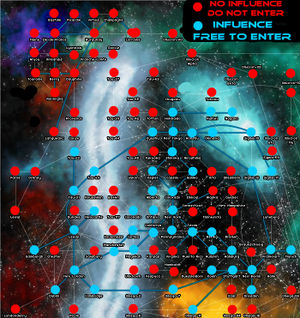 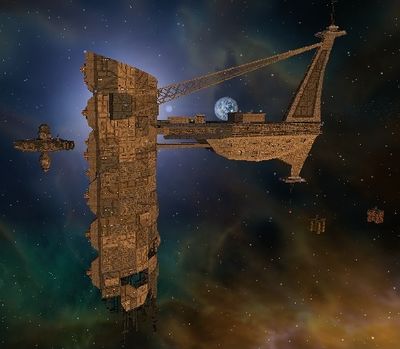 Originally constructed in 521 A.S., to oversee the transition of Trade Lanes and Jump Gates to Rheinland's ownership after Interspace Commerce was all but forced to sign agreements to nationalise them, Bonn Station has since become the headquarters of Interspace within Rheinland, and is the station where all cargo being shipped out of Rheinland is insured for the journey.

Rumours, that Interpspace is involved with Hessians has angered the Rheinland government considerably, although as yet it has been completely impossible to prove. However, the Rheinland Military has recently stationed the Battleship Strausberg outside the station to keep an eye on Interspace's activities. 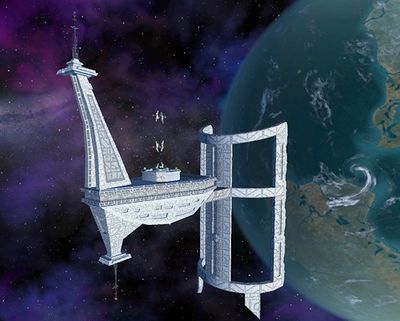 Interspace Corporate was founded in 204 A.S. by Ageira and Deep Space Engineering, since they could pool the necessary capital in insurance and finance. Built in the same year, Newark Station is the local headquarters for the now renamed "Interspace Commerce" (IC), one of the largest financial concerns in the Sirius Sector. While Interspace was initially responsible for financing the construction of the vast Jump Gate and Trade Lane network that connects the various colonies, it was forced to divest itself of these holdings as a result of the Rheinland-Kusari Trade Embargo in 521 A.S.

The corporation changed its name to Interspace Commerce and has since transitioned to insuring cargo shipments within and between the various colonies. The remainder of the Newark Station population is a constantly shifting crowd of traders, technocrats, executives, and Bounty Hunters, all cutting deals and arranging for the transport or protection of their goods. 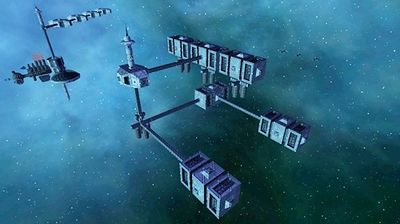 The base handles a large portion of the traffic moving in and out of Okinawa, and the GMG often stores a large amount of H-Fuel reserves at Furyoku. Attacks in the system against GMG and Kishiro facilities, as well as the Interspace base, have been more or less non-existent, save for the occasional raiding parties that are almost certainly Hogosha in origin. Part of the reason for this is almost certainly due to the influence and dealings that Interspace are known to have with the Golden Chrysanthemums. In exchange for the lack of piracy and attacks on their facilities and transports within Okinawa, it appears that both the Kishiro and GMG authorities within the system have taken to turning a blind eye whenever a Golden Chrysanthemum vessel has been seen docking with Furyoku Station. 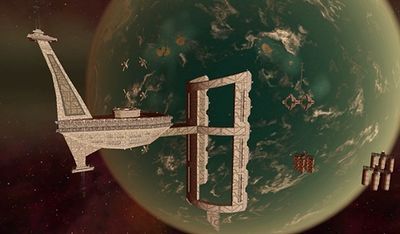 Waterloo Station acts as headquarters for the local branch of Interspace Commerce (IC) as well as foreign shippers such as Republican Shipping and Universal Shipping. It is a busy, bustling place, constantly humming with activity as business transactions are conducted around the clock. 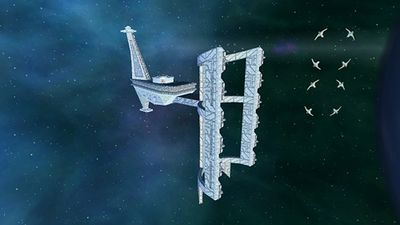 In the early years of the Kusari Empire, foreign immigration was strictly controlled and permanent foreign settlements on New Tokyo were strictly forbidden. While the Kusari Shogunate was unwilling to bend these rules, it still accommodated foreign business interests by allowing Interspace Commerce to construct Roppongi Station in 318 A.S. Despite the restrictions placed on permanent residencies elsewhere in Kusari, and the outrage expressed by conservative Kusari politicians at the Hideyoshi controlled Shogunate for allowing foreigners into the New Tokyo system, Roppongi Station's business flourished, with many corporations opening offices onboard.