Ageira Technologies is one of the "Big Three" corporations of Liberty's business world, specialising in Faster-Than-Light transportation research and development. They are the only manufacturers of Ageira White Boxes. Other key Ageira products include armaments from Detroit Munitions; and industrial products such as super alloys and superconductors.

Ageira prides itself on developing cutting-edge products in a wide range of fields across Sirius. 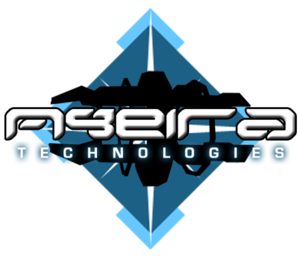 Another version of the Ageira logo.

44 A.S. - Valhalla research is formed, with backing from the Government and Military.

44 A.S. - Valhalla Research makes a break through in engine technology that will allow ships to travel between star systems in months, not years.

120 A.S. - Valhalla Research invents the orbital Docking Ring, making it easy to lift Men and Materials out of a Planets Gravity well.

126 A.S. - Valhalla Research announces they are building a major research facility in the Texas system.

185 A.S. - Liberty President unveils the Jump Gate project to all of Sirius.

700 A.S. - Ageira and Interspace team together to develop a real-time tracking scanning of cargo through Trade Lanes and Jump Gates.