Kaze Dagon (born December, 8th, 794 A.S), is a mercenary of some little fame in Liberty, but mostly known in the Taus for her career in service of the Colonial Republic, by being an efficient pilot, surviving the hellish battles that daily plagues the Tau-23 fields between the Outcasts and the Colonial Republic, and by being the first woman and the first non-Crayter Colonial Consul (President) alongside Paul Atreides.

By the last semester of 817, she was missing, presumably caught by the Liberty Navy or managed to escape and disappeared until the warrant of several million credits on her head was forgotten.

Several encrypted intercepted transmissions between known associates indicated her possible location was at the unknown Gallic sector where The Council originates from and now the Gallic Royal Navy that is performing an invasion in the Bretonian House.

She later surfaced in the beginning of the year 818, as Daniela Derringer, working as Security Chief of the Reaver Merc. Co. With the financial backing of the Company, she created several security teams, capable of rivaling with the top marine special operations teams of all Houses Military.

After the Silver Reaver disappeared, her position inside of the Company skyrocketed to the Special Operations Lead spot, running any special operations of the Reaver Mercenary Company up to this day.

Born (with a twin brother) in the rich environment of the Chelsea sector in New London, Kaze, was brought up with all the luxury and education that a high society family, with ties to the Royal Family, could have, since the Nelson-Reidman family was and still is the detainer of the Duchy of Newcastle.

The Nelson-Reidman family had many generations linked to the Bretonian Armed Forces, and her great-grandfather was a former Commodore, harnessing fame and recognition. Even so, the last generations of Nelson-Reidman's had a few bad run's against luck, as her grandmother, following her father foot-steps, died in combat in Dublin and her grandfather, a Bowex executive, died in an accidental (although facts pointed elsewhere) spacecraft occurence in Kusari. That was the turn key for this family as her mother (at the time very young) was raised by the Blood Dragons and learned their ways, until she came of age and returned to Bretonia and enlisted herself in the BAF.

Little facts are available from 807 A.S, since her whole family (father, mother and brother) disappeared from Bretonia and she only resurfaced in the Taus in late 816 A.S where she was enlisted to the Colonial Military Service, where an interrogation file mentions the Liberty Security Force, but nothing more than that.

Several C.I.S. files were made on her persona and are accessible to only certified persons by the Colonial Republic.

Service with the Colonial Republic

Drawn to the Taus and somewhat entranced by the news of hellish fights against the Outcasts there, she appeared in Tau-37, in the middle of a big engagement between some pilots of the 44th Battlegroup of the Colonial Republic and several Outcasts with dreadnought support. Quickly entering the fray, she managed to hold her own against the superior spacecraft that the Outcasts sport, and aided the Colonials to a victory. Without any delays, she was quickly introduced and assigned as a First Class Lieutenant to the 44th Battlegroup, the battlegroup that saw most action in those days and were known to be a vicious, deadly and happy trigger unit when it came to Outcasts in the scope.

Quickly rosing through the ranks, due to winning several key engagements and by completing key undercover assignments, her mastery of the Nyx and asteroid battle training, she attained the rank of Colonel, which harnessed some attention from sources she did not wished. Which sources, the C.I.S. couldn't discover. It was around this time she met a professional mercenary by the name of Jordy Meller, that was collecting contracts over the local Cartel ships. Helping one another in several fights over the Taus, the couple was usually seen together and as many people witnessed, her heart was quickly taken by the usually calm and easy-going Jordy.

But the stress kept pilling up, alongside the losses that the sudden resignation of President Wingates and confirmation as Consul, that suddenly removed her from the front-lines and threw her to the 'bloody paper pushing chair' as she said once.

Within two months and with some reforms in place, she left the chair of Consul for a quick vacations with her companion Jordy Meller to deal with 'family business', leaving Paul Atreides commanding alone the designs of the Colonial Republic.

She never returned and an 86 Order was issued by Paul Atreides to apprehend and retrieve Kaze Dagon.

To this day, this 86 Order is still in effect.

For some, her arrival alongside Jordy and the consequent staying at Liberty were barely noticed. For others, especially the Liberty Security Force and most of the secondary fleet of the Liberty Navy it was well noticed. From incursions to Area 21, to the crippling of several capital ships, to fleeing traps laid to her by the Liberty Security Force, the sight her blood-red Nyx with a custom made Inferno (of unknown origin) normally stirred the New York system.

But she always kept her fire from harming innocents in Liberty, even allowing a crippled LABC to limp back to Norfolk as the Capital ship had several previously free slaves in its hold, and to even getting rid of a mentally instable Outcast captain that commandeered a Storta that decided to attack New York.

In those times, many Mercenaries like her, were quickly drawn to Liberty due to the immense contracts available there, going from protection of the lanes, hunting known pirates, assisting the Liberty Navy in the Rheinland incursions, hunting known mercenaries that were accepting contracts against Liberty and of course her outstanding participation in the Merc Wars against the Liberty lawful forces.

Why she chose to accept contracts against the Liberty lawfuls is a important question, because all of her previous background actions and affiliations suggests she tends to follow the lawful side. Inquiries were made by several agencies and only a piece of data from an encrypted file saying "O.,er-.,nºD-.b.e~M.,k" was retrieved from a mercenary attempt to collect her head in one of her safe-houses.

And as suddenly she arrived, she disappeared.

C.I.S. managed to track her in Kusari, but she quickly evaded her pursuers flying what it seemed a Golden Chrysanthemum made Orchid. How she got her hands in such piece of equipment or even if the GC knows about it is unknown.

Raised in the top schools of the Bretonian Education system, Kaze is by all means well trained in nobility protocols, public behaviour and has an extense knowledge in the fiddle of politics. That further deepened by travels all around Sirius and an unusual knowledge of languages, complement her skill set quite nicely. Although sometimes quick to anger and to loose composure, just like her mother, she tends to be in a general happy mood, even being known to laugh in the middle of battles when she has the 'room' to do it. Known to spent a lot of her time reading books while sitting on one of her ships, she is a closed book for the ones she does not know, and a very welcoming and warm one to the ones she does.

-- Attention, this is a summary of the ships she is known to fly --

Colonial version of the IMG Nyx - Evo 2B.

Without doubt, the favorite ship of Kaze Dagon, the Colonial Nyx, is a modified version of the IMG one, adapted for all purpose fighting, it's the ship that Kaze is normally seen flying. With a little custom paint job, where the normal metallic red is substituted by a glossy blood-red, as a form of intimidation in the battlefield, and choice project weaponry, known as C.O.D.E. Weapons by the frequently user, and sports either a Cruise Disruptor or Razor, depending on the foe to face.

Latest reports indicates that Kaze holds at least six of those (that she bought before leaving the Colonial Republic), stored through out Sirius in safe-houses, for her personal use. 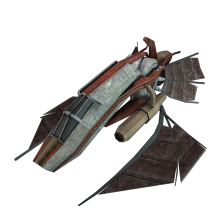 What it seems, this slender bomber, designed to be used only by women, is the choice bomber that Kaze uses when her current target needs a bigger punch to fall. Seen by the last time in the middle of Kusari, paving her way through three mercenaries that tried to apprehend her for a 15 million credits (at that time) bounty, this bomber is agile enough to fight almost at par with a fighter, and in her hands, one of those mercenaries even received a baptism of Antimatter through the cockpit.

In the words of a KNF Chūi, "When we see a group of these bombers coming to our location, we know that we cannot loose focus or underestimate the women in the cockpit, for it will be a dangerous action to take or probably even our last."

How did she get her hands in one of these nimble bombers, is unknown.

Ever since her appointment as the de facto leader of the Reaver Mercenary Company, a job she does to the utmost professionalism, one can very well acknowledge her affiliation to it.