The Dukes are a clan of Zoners originating from both Planet Erie and Planet Gran Canaria. They come with as varied personalities there can be, given that most of them have been brought up amongst fellow Zoners, with their traditions and customs.

When the Planet Gran Canaria was discovered by Zoners, about half of the Dukes living on Planet Erie chose to resettle to the new Zoner homeworld, away from Liberty and it's influence, while the remaining Dukes chose to adapt to Liberty's reign over Pennsylvania and to work on improving the planets economy.

After being some 30 years apart, Reisiger Duke of the Erie branch of the family made his first trip to Gran Canaria, where he met his distant cousin and future wife Jarline Duke, thus uniting both family branches once more.

Further details about their escapades can be found here: The Dukes in Space ((//Discontinued for now!//) 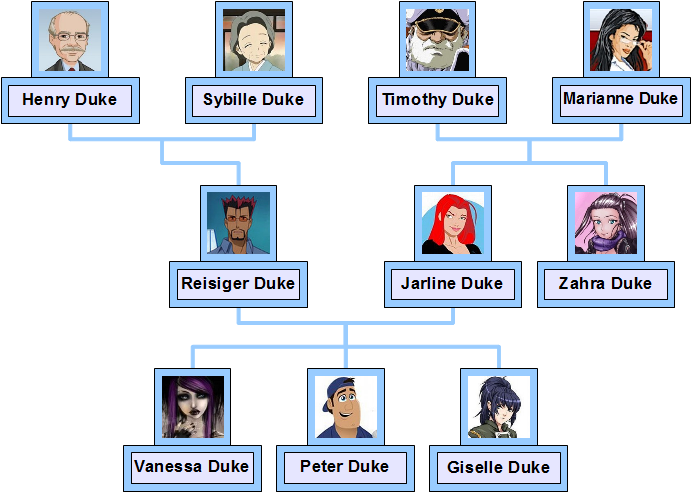 Of the large family, a number have ventured between the starts of Sirius. Their biographies are listed here:

Born on Erie, Reisiger was subjected to the libertonian influence present in Pennsylvania. Feeling like venturing out to see what else is there, he started trading all over Sirius, first as a Freelancer, but later on showing his Zoner origins by using the corresponding transponder after joining Omicron Supply Industries and quickly rising to the rank of Trade Division Coordinator.

One of his trade runs brought him to Gran Canaria where he by visited the part of his family living there since 787 A.S. He and Jarline Duke quickly found a liking on eachother and thus Jarline joined Reisiger's crew as the ships main scientist.

During their trips, their liking turned into attraction and finally both admitted their love to the other. The wedding ceremony took place on Erie in 798 A.S, to honour their clan's origins.

Since then, Reisiger more or less financed or kick started the different undertakings and enterprises run by his family, like the Bank of Dukes managing the family's fortune, the Treecat II conducting scientific explorations under Jarline's command and others.

In 817 A.S. OSI's CEO was assassinated, and Reisiger was handed over the company by the late CEO's will.

Jarline was born on Erie and lived there until she reached the age of 7. It was then in the beginning of the year 787 A.S, that about half of the Dukes on Erie chose to resettle to Gran Canaria.

She graduated on Gran Canaria's top university at the astounding young age of 17 and joined Reisiger Duke's transport crew as science officer after meeting him on his visit to her branch of the Duke family.

A year later, the two married on Erie.

Since Reisiger's employ in OSI, Jarline was undertaking scientific explorations first with the Treecat - a Conference class Zoner gunboat -, and later on with the Treecat II - a Corvo class deep space exploration cruiser; the successor of the first vessel which got crippled by the Tundra, a Nomad infested Liberty Siege Cruiser.

Lately, the Treecat II was undertaking extensive research trips into Liberty, in order to further the knowledge of the Dark Matter Clouds both in Kepler and Texas, especially in how the Texas Incident came to happen.

Reisiger's father - a former Banker in retirement - took up the task to manage the Duke family's fortune, as well as supporting newly graduated pilots at Planet Erie with small loans.

He now enjoys floating above Erie in the Bank of Dukes - a Democritus Luxury Yacht commissioned to be the banks headquarters.

After hearing about his daughters near fatal encounter with the Tundra, Timothy vowed to protect his family and other Zoners from those who would attack or threaten their existence.

To that end, he commissioned the Hexapuma - a Fearless class Zoner destroyer funded by the Bank of Dukes.

The Hexapuma is now often found guarding either Freeport 1 or Freeport 6 to shoo away pirates and other cutthroats abusing the Freeports No-Fire Zones to conduct their bloody business.

Vanessa is the eldest offspring from Jarline and Reisiger. She was born in 798 A.S on Freeport 7 during a trade mission into the Border Worlds.

Raised on both the Treecat and Gran Canaria, she's developed quite a hatred for those attacking and killing Zoners. Nomads are her most hated enemy. She won't forgive them for destroying her birthplace, waging war against mankind and nearly killing herself, her mother and the Treecat's crew.

Her appearance is a mix of a reflection on her disgust of the death of humans and playing with peoples prejudices. Dark and gloomy to the outside, Vanessa does enjoy indulging herself into the finer things life has to offer, and occasionally chasing after a man she finds interesting.

In order to fulfil her intent on protecting Zoners, she's been given command of the NastyKitty - a Conference class Zoner gunboat. On her request, most of her cargospace has been filled with an elaborate spa.

Currently her vessel is patrolling around Freeport 6, Freeport 10 and Planet Gran Canaria.

Peter and his twin sister Giselle were both born on Gran Canaria. But to his sister, Peter was raised on the Treecat and later the Treecat II, enjoying to tinker with whatever piece of equipment fell into his hands.

As his hobbies all revolve around repairing, taking apart and improving various pieces of equipment, he chose to cast of in a Repair Ship once coming of age, in order to see as much as possible of the different technologies developed and employed all over Sirius.

While he doesn't like combat, he won't be running away if there's a friend or ally in need of his skills. A notable experience for Peter was aiding in the relocation of the (]c[)Leonardo and the following battle against the Nomads attempting to destroy her.

The Duct tape has as of late been repairing Barrier Gate Station and ships docking and mooring there, after the attack by the SCRA on that station.

Peter's twin sister was taken in as a child by Reisiger's parents, as she got inflicted with a disease which at that time required the medical know-how of the House Systems to treat.

Being thus raised on Erie and spending many years of her childhood in a Liberty sponsored rehabilitation and school centre for children, she developed strong bonds to the house which cured her illness, allowing her a normal life.

At the age of 13, Giselle took a shuttle-flight along with her class-mates on their way back from an excursion to visit West Point Military Academy, only to experience how the shuttle was rammed back into the stations docking-port by a Gull class transport.

As it turned out, the transport had been hijacked by Liberty Rogues and tried to ram itself into the station, in an ill-planned attempt to cause enough confusion to free a criminal from the brig. Only thanks to the swift reaction of the cadets on the station and the Liberty Navy pilot of the shuttle, neither was anyone fatally injured in the crash, nor did the criminals manage to escape.

As she came of age, Giselle decided to sign up with the National Guard Service to help protect the house she came to see as her home.

Originally her family was quite upset about her decision, but in the end agreed that Giselle had to follow the path her heart would lead her to. As a quite surprising fare-well gift, Giselle one morning found both her Upholder and Guardian to have been outfitted with class 8 armour upgrades.

Jarline's sister Zahra always had a fable for shuttling passengers around.

Starting with an X-Shuttle in her early entrepreneur-days, she recently recieved a family sponsored retrofitted Prison Liner.

Her passenger ship - the Freedom of the Stars - combines now both the increased security and armour plating of her former use, as well as moderate quarters for the passengers.

As the Freedom of the Stars favours ferrying passengers in hostile environments over providing luxury, she is known for going almost everywhere in Sirius, where Zoners are welcome.

Her liner can be found ferrying passengers from and to Erie, Boa Vista Station, Shasta Orbital Skyhook and Luxury Liner Hawaii. From time to time, the liner gets chartered to transfer personnel or researchers to other places aswell.