This is a player faction. For the affiliated NPC faction, see Rheinland Federal Police

After the 80 years war against the GMG, the remaining members of the Rheinwehr were forced to withdraw back to New Berlin and surrounding systems. With the military weakened, a period of civil unrest followed causing an increase in criminal activity across Rheinland.

To counter the growing increase in crime against the civilian population, a council of high ranking military officers quickly formed a federal police agency. This agency was responsible for the enforcement of Rheinland law, civilian and trade protection, the staffing and management of Vierlande Prison, the suppression of subversive and rebel groups, and personal protection to the Chancellor.

After several years of hard-won experience, the Rheinland Federal Polizei are an elite police organization.

Today, the Rheinland Federal Polizei (RFP) is the left hand of the Chancellor in Rheinland Territory. They enforce all laws put forth by him and punish all those who break them. This can be anything from breaking the Embargo between Liberty and Rheinland to smuggling contraband within Rheinland space. The Rheinland Federal Police are known throughout their territory to be both strict and ruthless when it comes to enforcing their laws.

Duties of the Rheinland Federal Polizei:

For the vessels of Fighter, Bomber or Freighter class – cargo confiscation and 1.000.000 SC fine.

For the vessels of Gunboat class or Transport class with 3500 units of contraband in the cargo hold or less - cargo confiscation and 2.500.000 SC fine.

For the vessels of Transport class with more than 3500 units of contraband in the cargo hold – cargo confiscation and 4.000.000 SC fine.

Declared by the Laws of Rheinland, no transport is to pass Rheinland borders towards Liberty, except:

Ageira, DSE, Synth, Foods and Orbital Spa and Cruise are allowed to haul the same goods within Rheinland. If carrying other goods, they will be ordered to drop them and to change course to Liberty space. Universal Shipping, as well as any other Liberty companies are banned from Rheinland space entirely.

Ships containing any other cargo are to be turned back home under penalty of death. Destroy their ship if they refuse to take the shortest route home with their cargo on board.

For further explanation of cargo regulations, see Laws of Rheinland.

Be advised, while the Rheinald Federal Polizei have strict criterias for handing out promotions, the Inspekteur of Polizei and the Polizei Direktors may demote any Polizei pilot if their actions make this kind of punishment necessary.

Apart from this, to gain promotion, Hauptkommissare must complete 2 of the followng: 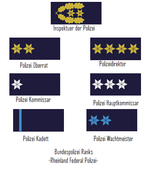 Ranking insignia of the Polizei

Apart from this, to gain promotion, Kommissare must complete 2 of the followng:

Requirements for Wachtmeister to gain the rank of Kommissar:

Apart from this, to gain promotion, Wachtmeister must complete 1 of the followng:

Requirements for Kadetts to gain the rank of Wachtmeister:

RFP|Rank-(First.)Lastname (Fighters/Bombers. A variety of symbols can be added to replace the - after Rank, so a Polizei pilot or officer can have more than one fighters. If the whole name can not fit, the first name can be removed)