This is an unofficial player group.

Literally meaning 'Haughty Guardian Lions', the Tokui Komainu are a revolutionary movement within Kusari; in favour of replacing the current democratic system of government with an Imperialistic regime. The movement itself focuses on attacking the individual corporate powers in the hope of subverting their hold of Kusari. To achieve this the Tokui Komainu are known to openly attack and raid corporate transports moving through Kusari. While allowing them to monitor the displacement of resources throughout Kusari this also provides the Tokui Komainu with one of it's, few, vital incomes of resources.

Prior to 818 A.S. (and the Emperor's forced exile in Bretonia) the noble families of Kusari were highly revered. Previously serving a multitude of roles within the Kusarian society these families held a reputation of erudite values. Having grown accustomed to this lavish lifestyle of luxury, many of these families grew anxious following the events of 818 A.S. and the implementation of the new democratic government. Despite many objections raised by these (up until now) ruling classes, these alterations resulted in the abolition of many key influential positions; previously held by these noble families. In retaliation to this displacement, of these family's' prestigious social status within Kusari, many of these families mounted up in defiance of the usurpation of their privileged social status.

A prominent number of these families chose to abandon the new Democratic system and attempt to redeem their own status. Along with a few other noble families the Kamida drew together their assets under the unified banner of the 'Tokui Komainu'.

A large amount of the Tokui Komainu support was also supplied by the Kusari population; with many people, throughout Kusari, growing restless with the recent announcements of the Emperor's forced exile. While the preponderance of the population were fixated on the previous government a notable number of individuals were attracted to the ideals which the Tokui Komainu strove towards. In an attempt to heighten this support the Tokui Komainu reached out across Kusari in a multitude of displays to entice new members of the revolutionary movement. This attempt of communication ranged from Kusari citizens to salient organisations. In response the Tokui Komainu managed to gain a multitude of key individuals as well as vital allies; ensuring their position as a revolutionary movement.

Among those populating this resistant mind-set were the the men and women of the Naval Forces; who held conflicting views on these past events. Many considered the dismissal of the Emperor in Bretonia to be a traitorous act, a deplorable choice lacking honour and tradition. While others felt dutifully bound to continue to serve the current standing power of Kusari. Of those who held doubt in their minds regarding the aptitude of those who made these decisions, to some, the Imperialistic goals of the Tokui Komainu were of interest. Despite their prior allegiances those, of the Naval Forces, who migrated to the services of the Tokui Komainu were, in almost all cases, accepted with respect and honour as depicting of their courageous fortitude in deserting their previous democratic rulership. This introduction of trained personnel was of key importance to the Tokui Komainu, as it allowed them to not only obtain skilled pilots but also to depict the frail structure of the democracy in it's inability to hold onto it's own soldiers.

It is the firm belief of the Tokui Komainu that it is due, fully, to the encroachment of corporate powers on Kusarian politics that has resulted in the collapse of Kusari as well as the instalment of the new democratic system of government. Formed for the simple purpose of producing a profit the Tokui Komainu consider their motives to lack honour and dutiful motives which drive the rest of Kusari's society. Lacking these basic moral guidelines the Tokui Komainu consider them unfit to hold any position of independent power and a distant hazard to Kusari if left unchecked.

Since these corporate powers hold such an essential role in Kusari's society the Tokui Komainu also feel threatened by these continuous expanses of such companies into other areas within Kusari's infrastructure. They are fearful that, if left unchecked they could become overzealous and attempt to impose themselves as an influential power be that directly or through puppeteering certain individuals or groups. It is in keeping with this prediction that the Tokui Komainu believe that these corporate powers must be displaced from their power bases before they are able to obtain more of these influential links through Kusari.

The original ideals of the Tokui Komainu, following it's initial founding in 819 A.S., were to displace the democratic system of government in place for Emperor Kogen's return to Kusari. In his absence, however, many under the Tokui Komainu's banner began to question Jien Kogen's legitimacy to the throne. This doubt was based, primarily, on the view that Kogen, and his lineage, were one of the sole reasons of the successful expansions of Kusarian corporate powers into influential positions within government. Having achieved Imperial recognition due to the cope of 321 A.S. the direct blood ties which granted Kogen the position of Emperor were insubstantial at best.

These doubts were further exploited by certain other growing powers within the wake of Kusari's chaotic aftermath; following Kogen's removal from power. After developing this idea, due in part to the interventions of key factions within Kusari, the Tokui Komainu focused it's aims on enforcing a new Imperial ruler-ship; following the dissolution of the democratic government.

While not at the pinnacle of the interests pursued by the Tokui Komainu, those of non-Kusari origins/influences are viewed with suspicion and distrust; primarily based on the negative results yielded (in the views of the Tokui Komainu) from previous ventures pursued in combination with gaijin organisations. Organisations such as Synth Foods; who decimated the traditional foods industry with Kusari, The Gallic Navy; who separated and abolished the Kusari Navy in the Taus War, and The Liberty Rogue; who preformed a series of raids on the nearby Kusari systems.

It is in keeping with these past consequences that the Tokui Komainu hope to form, as a bi-product of the Imperialistic regime, an independent Kusari. One free from the dependencies on gaijin influences, and releasing the dominating grip which external powers have of the internal struggles of Kusari.

Preceding a series of political discussions, which commenced on 819 A.S., between the Tokui Komainu and Blood Dragons a settlement was established by both groups. The settlement granted the Tokui Komainu sanctuary within the Blood Dragons areas of influence as well as access to ships and weaponry in order to aid in their revolutionary efforts. This settlement also signified the beginning of an alliance reached by both factions.

Due to a shared interest in Kusari's future the Tokui Komainu and Consortium formed an alliance in the early part of 819 A.S. Having assumed control of certain assets preciously orchestrated by the Golden Chrysanthemum's this alliance presents, through the Consortium, access to certain key assets throughout Kusari. In keeping with this the Consortium and Tokui Komainu are know to, on occasion, carry out joint operations.

In conjunction with diplomatic negotiations between the Tokui Komainu and the Independent Miners Guild an amnesty was reached. This stated that, barring certain conditions, both sides would reduce their opposition to one another within Kusari's systems in exchange for the Independent Miner's cooperation in reducing their supply shipments to Kusari.

The following are systems in which ships under the command of the Tokui Komainu can be witnessed carrying out routine operations; as well as the specific details regarding the importance of each sector. 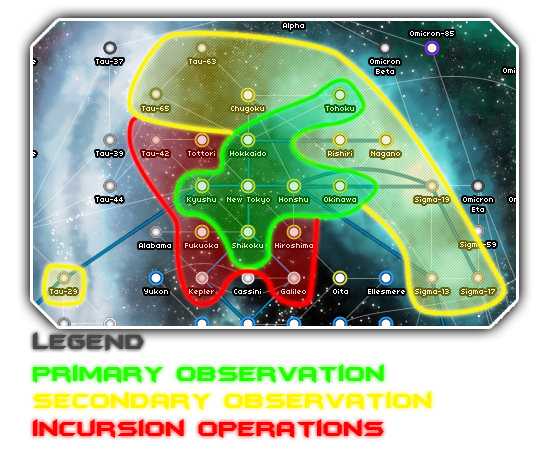 These systems are, of primary importance and thus, continually under watch by the Tokui Komainu.

Due to these systems holding, or being located in proximity to, friendly or allied bases, or sectors, these systems are of of minimum threat and may be traversed with limited risk or hindrance.

While still of interest to the Tokui Komainu these systems are of secondary importance and should be navigated in pursuit of hostile vessel, or in assistance of allied individuals.

System located within this category are either; secluded allied territory and thus of limited interest/access, unless in the case of assistance, or outlying sectors and thus isolated from any allied support.

These systems are areas of interest to the Tokui Komainu however, due either to the factions present or threats involved, they are to be avoided by standard Tokui Komainu flight groups unless it is unavoidable in which case they should be navigated by small, experienced, groups for short periods of time.

On rare occasions select vessels may be instructed to enter these systems with direct and specific instructions.

The bulk of the Tokui Komainu force is made up of the Bushi(Warrior) class. Their roots are drawn from common warriors, as well as those from more honour bound positions. Those within this class strive above all to maintain their own honour while in a similar suit follow the laws of the Bushido virtues.

The newest warriors proven to be of worth to join the Tokui Komainu ranks. Due to their inexperience in the art of warfare and life of the Tokui Komainu in general, the warriors of the Renshuusei are expected to learn their role and enhance their abilities within Kusari.

Born from the fire of experience, the Keikensha are considered to be the reliable main body of the Tokui Komainu. Combining a strong will and an even stronger wit is an essential quality which these individuals possess, which make then ideally suit to the confrontational situations they may encounter.

The most elite body of bushi present within the Tokui Komainu, the Eriito-keibi are handpicked by the individual lords of each of the notable clans. It is due to this distinction in selection that they are often known as 'The Chosen'. Individuals of this rank are relied upon for their prowess in resilience in the face of fear with a will to follow orders no matter the cost. It is due to this dependency that members of this rank are granted access to grander vessels such as gunboats.

Men who have been seen to stand apart from the rest are often given the honour of joining the 'Taisho'. A small but elite group of capable men who help implement the commands and war efforts of the Tokui Komainu. Most often than not this title is granted by the leading members of the Kamida Family.

The Shikan is the lowest rank within the three commanding heirachy, which aid in orchestrating the forces under the Tokui Komainu. Often young men, these individuals are often seen as the conduit between the commanding class and the Bushi class. Their roles range from distributing orders from their superiors and commanding the operations of small divisions of pilots.

A subordinate to the Senshin-Taisho the Buka-Taisho are the less experienced equivalent of their more knowledgeable superiors. Having often risen from the position of Shikan these individuals are often considered rash and as such are often instructed by their superiors closely, to avoid their commanding position resulting in disaster. While operating alone these individuals have the authority to lead groups within the Tokui Komainu on tactical operations previously assigned to them by their superiors.

The most senior rank achievable within the Tokui Komainu, the Senshin-Taisho are the right hand of the nobility who orchestrate the overall running and operations of the Tokui Komainu. With this high authority the Senshin Taisho are expected to be able to act independently, and make absolute choices of their select area of operations.

The role of the Kizoku Dangou is to act in the best interest of the clan, acting as a counterbalance to the clanleaders decisions. Meaning he will analyze the decisions made, reflect upon their consequences and provide feedback to the leader and the clanmembers. This man is often regarded as the shepherd of the clan maintaining and reminding the samurai of their warrior code.