The Xenos... Xeno, title branded to our movement long ago. Something which put our struggle and our ideology into a nice little box. Something you could look at and shake your head, or scorn over the evening news, as members of the aristocracy curse our names after another shipment of whatever fine trinket they were hoping from Kusari or some other damn place was denied them for but a day was pulled out from under their feet by some Xeno pilot risking all to pit his will against impossible odds.

The movement got its name in 600 A.S., but the origins of the movement can be traced along a series of profound incidents that took place throughout her history. The most noted of these are the double blow of the exhaustion of Colorado's natural resources and the great Texas incident of 500 AS. With Colorado's massive labor based economy barely sustaining itself upon a rapidly faltering practice of chemical remining Houston's own population was subject to Deep Space Engineering and Ageira Technologies both departing the planet, along with anyone who could afford to do so, leaving in their wake a population derived almost entirely of those impoverished to escape the sudden collapse of the economy.

This teeming population of the poor and disgruntled lead to the construction of Huntsville prison for the system's, and eventually Liberty's, hard cases in addition to the steady development of labor workcamps for the planet's ever increasing criminal populations. The rapid expansion of these camps at the exclusion of any other real development of sincere labor programs incensed many sectors of the local population, feeding into its own system of frustration and distrust. These were the days of the great trade embargoes between Liberty and her neighbors over Interspace's corporate greed, every home noticed how easily Liberty trembled when cut off from the goods of her neighbors, she having imprisoned the hands she might feed herself with.

Things came to a head in 590, when the last shipyard in Colorado was shut down in favor of Kusari business, removing one of the last major employers in the system. A number of violently incensed workers seized the station in a demonstration against the perceived callousness of the act. The minor rebellion was put down as quickly as it started and just as violently.

600 AS is when our kind first found the title Xeno adopted to them, as Colorado and Houston both fostered a new generation of those who felt their livelyhoods had been snatched from them in favor of cheap foreign competition. They nursed a hatred for both foreign entities in addition to the aristocracy of Liberty and the forces that toiled to preserve the status quo, the navy and police.

The police. The formation of the LPI is what truly galvanized our movement. The conversion of the labor camps that so many had come to know as a fact of life were revolutionized, brutalized, to turn a profit. Slag camps were raided for fresh bodies, those within society who had no advocates were certain to find themselves on the wrong end of petty infractions with hefty trials of service. The LPI were lauded for turning the idle of Liberty to honest work, turning a profit in consumer goods to tickle the fancy of the same foreigners who had stolen their livelyhoods, now were being amused by the produce of a virtually enslaved population.

Colorado, too, formed additional hotbeds as Denver was seized by the elite. Turning the planet away from dirty industry to serve instead as the latest world designed to cater to their particular tastes built upon the money gleaned from Ageira and Interspace Commerce interests. Those sects of the population whom were deemed undesirable were relocated and subject to the process of police oppression as their contemporaries in Houston.

As generations came and went the radical enclaves of dissident citizens caught in an endless cycle of hard time and hopelessness formed the early core of what was to become the modern face of the Xenos. Focused on settling blame upon the import of cheap foreign goods as being the root cause of the hardship of the Libertonian working class, those that could secure vessels began to prey upon transports moving goods through the California and Colorado systems, taking advantage of bases carved from the asteroids from which that their ancestors had once gleaned a living.

Subtle sponsorship was gained from Universal Shipping, to exchange for security of passage and to further their own ends of sabotaging the markets of their competitors, in addition to millions of grassroot supporters.

With each subsequent captured Xeno returned to Huntsville serving as another voice of the cause, and the youth of Houston and Denver rallying, the numbers of the Xenos continue to swell; outracing that of their closest rival, the Liberty Rogues, and granting the possibility of a greater edge against the Junkers.

Those who act against us enjoy rankling on what we lack. Our ramshackle vessels glean cries a plenty of duct tape. Our weapons gutted from the remnants of those we've torn asunder or bartered from Zoner merchants garner no end of scorn for their inelegance. But our lack is the fire that keeps our movement alive despite its short comings. When Liberty's trials evaporate so will we. That our numbers swell with each passing year fills my heart with sorrow, we are progressing but we are not winning. But progress is made. Our weapons are inelegant, our methods barbaric and we often venture towards the lanes in the heart of the most heavily armed nation in Sirius in ships that have lost their ability to hold ammo... Somehow to emerge time and again as victorious.

The Xeno Alliance was the handle of an inter faction group of like minded Squadron Commanders who elected to pool their limited resources in order to accomplish somewhat more substantial missions, forgoing the standard practice of restricting patrol groups to limited numbers to reduce overall losses. The Alliance was initially composed of the Serpentis and Colorado Blazer Wings; lead by Leo "Cobra" Mathews, David "Copperhead" Chambers, Nathan "Coachwhip" Williamson and Caeon "Fanatic" Lewis. The Colorado Blazers quickly went defunct following the impromptu arrest of Lewis shortly after the formation of the Alliance. While the Alliance now composed of the singular, that particular bit of information somehow didn't make its way up the chain of command allowing for the Serpentis wing to operate under far greater funding than she would normally have been afforded. By the time this revelation came to light the Wing had accomplished a significant number of victories against both military and civilian targets, making a name for the Xeno cause in the process with many significant victories. The funding was continued and the Wing was permitted to continue to grow. One of the more historical moments sparked into motion by the Alliance was the forming of a limited treaty alliance with the The Order. Securing the Xeno movement a source of substantial material backing and external support for the first time in her history. Another recent advance for the Xenos was a number of talks with the Hellfire Legion, who has the equipment and technology that the Xenos need, but lacks popular support. The Xenos have the exact opposite. The two sides reached an agreement not to shoot each other on site, and to help each other out, but only time will tell if this unlikely partnership will last.

The Xeno Alliance is also responsible for the two largest recent evolutions in dealings and undertakings participated in by the Xeno movement. These would be firstly a deal with Corsairs, smuggling artifacts from Crete in a dealing with the Corsair Benitez Family to deposit on Ouray Base. After this, various freelancers and even corporate pilots supporting of the movement deposit them in various store-houses across Liberty. Finally, they are distributed to the public and to private buyers. Secondly, the recent undertaking to mine small amounts of resources from Planet Death Valley. While Xenos lack the logistics, funding and manpower to truly take advantage of this opportunity, small amounts are being taken from the planet to remove as much need to acquire said resources through the black market as possible. Acquiring resources through the black market more often times than not means funding the very criminal organizations they wish to remove.

Higher officers of Xeno Alliance. Spiritual guides, skilled speakers and advocates of Xeno ideology. Most of them have taken a much needed break from field work, and prefer to work behind the scenes, they do not appear very often in the public eye. Some of them are also too injured or old to continue active service. Their advice is still highly valued, and during dire times, they are called in to give whatever assistance they can give, be it advice, or in command of a fighter wing in the right place at the right time.

Combat officers, the Royals are the driving force of the Xeno Alliance, with every Xeno operation being led by at least one of the Royals. All on the most wanted boards of the LPI, they are fierce advocates of the Alliance, and their words carry much weight among the Xenos, and are respected and feared amongst the people of Liberty. They are also tasked by the commander to ensure a constant flow of new members to the Alliance. The Royals deal with all the diplomatic issues of the Xenos, at least the ones that are too small to be worthy of involving the commander. That means most of the diplomatic issues. Among the Royals there are three sub-ranks, Wing Commander, second in command below the Squadron Commander, he is in charge of the day to day workings of the Xenos. The two flight leaders are in charge of field operations. They organize raids, and recruit heavily. The rest of the Royals fill in where they can, and do much to confuse the police and navy.

Experienced and battle-hardened pilots of Xeno Alliance, the Ripes have proved themselves as Juveniles, and are put in command when a Royal is not available. They are often selected for the toughest missions, and compose the majority of the defense in the Xeno home system, Tau 45, better known as Alabama.

Juveniles are trusted combat pilots, who have proven themselves as hatchlings. They are the backbone of the Alliance, comprising most of the fighter pilots in the Xenos.

Hatchlings are applicants of the Xeno Alliance who have been accepted into the faction, but not with full rights, or a serpent codename. They will be promoted to Juveniles if they keep up with daily tasks such as patrolling and accompanying other Xeno Alliance members on missions. They also must keep up with the paperwork, which the Alliance is full of... and as in every organization with paperwork, it falls to the lower ranks to keep up with it.

Unrestricted access to any vessel available to Juveniles. Additionally: Repair Ship, Grizzly, Albatross, Pelican. Ability to apply to HC for use of Pirate Transport and Pirate Train as well as allied snubs.

Any gear available in Alabama (Tau-45) or on Ames Research Station in Kepler.

Note: Use of CODENAME weaponry is allowed for those who pass the harrowing of the Hatchling phase and graduate to achieve Juvenile. 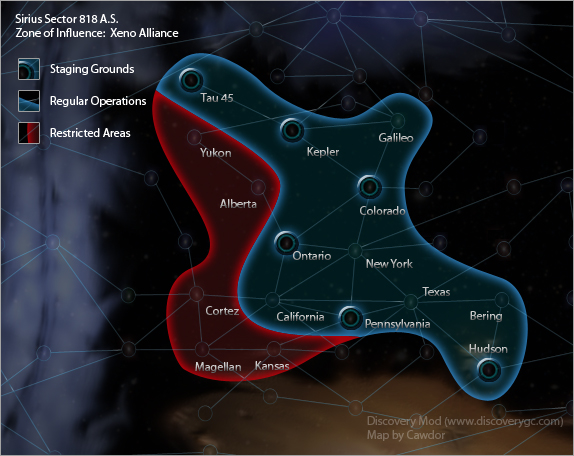 The main zone of influence of the Xenos, where we are most feared. In each of these systems the Xenos hold a base from which we launch our patrols.

This area is where the Xenos conduct regular operations, feel free to go amongst these systems. Destroy all hostile and unfriendly vessels.

Traversing these areas is not recommended unless its an extreme circumstance or Xenos are accompanied by the Hellfire Legion who have a stronger influence here. We don't want to lose any more of the precious little pilots we have left.