This is a player faction. For the affiliated NPC faction, see Bretonia Mining and Fabrication

History Bretonia Mining and Fabrication (BMF) has its headquarters, Isle Of Skye, located in Orbit of Planet New London. Bretonia Mining and Manufacturing is one of the largest commercial concerns in Bretonia, incorporating a network of semi-autonomous operations that range throughout Bretonian space all the way into the Border Worlds.

Founded in the year 821 A.S. by the precocious Lord Duncan MacRae upon the motto "Fide et Fortitudine", the intentions of Bretonia Mining and Fabrication are not profit-driven. Instead, the primary intent is to realize and secure well paid jobs for any Bretonian or friendly Sirian. Moreover, the secondary intent is to strengthen the Bretonian economy with products like ore, spaceship equipment and space stations.

Later on, Lord Duncan MacRae’s ship was lost in an unstable Jump-hole and nobody knows if he is alive or not. Mr. Zak Conner was left alone at the helm of Bretonia Mining and Fabrication but he was well trained and prepared by Lord Duncan MacRae, Cpt. Cyrus, and, with the support of the head of the Bretonia Police Authority, had the ability and skills to keep the Bretonian organization stable and avoid any negative impact on Bretonia’s security or economy. Zak is still living with the hope and the motivation that Lord Duncan MacRae will one day return.. Even if he is the only one who believes so.

Mr. Zak Conner, would later have more pressing personal matters to atendo to, delegating company responsibilities to two of his most ancient and trust worthy men, Cpt. Dilan Hunt and Lord Barba Negra, bouth had been recruited and trained long ago by Mr. Zak Conner himself, making them the most obvious choices to lead in its absence.

“We can and we will"

Later on Bretonia Mining and Fabrication would manage a Base construction team in a tremendous logistic operation to deconstruct Fortitudine and Fortisec space stations and rebuild them in the New London system giving an extraordinary example of not giving up after the raw-hydrocarbon mining field in Manchester had dried out and the bases been left useless. The movement was made and the bases are now focused on the storage of Gold Ore, giving the Isle Of Skye the space to focus more on the production of equipment and other the distribution of other types of ore.

After the loss of the Leeds system and the frequent attacks from GRN, Bretonia Mining and Fabrication decided to step in and do something. Bretonia Mining and Fabrication dedicated its own security station Fortisec as a picking point to support Planet Leeds and as a suitable place for Marines to be taken later to Leeds and also to serve as a place for the refugees on their way back so they can receive any medication needed to be transferred later to planet Sprague.

That’s not all, Bretonia Mining and Fabrication did not forget the expending dream in the Taus especially Tau-23 which is very rich of resources and link the system again with Bretonia. But after Galia occupied Tau-31 Gate Construction Site the dream became impossible.. impossible but not forgotten. Now the FortiSec's first priority is to support Bretonia Armed Forces in getting the Leeds system back. And maybe get their hands on lost stations such as LD-14 and Stokes Mining Station.

In 826 A.S. The Kingdom of Bretonia acquired Bretonia Mining and Fabrication, wile giving the corporation new objectives, it still retained its previous commitments as well as administration.. To better serve the Crown, Bretonia Mining and Fabrication started the construction of its new installation, through an inside voting, the name chosen for this installation would be a tribute to its founder, thus proclaiming it "Lord MacRae Shipyard" later on renamed to Wight Shipyard.

At the end of the Galic War, the BMF Board of administrators would vow to bring to justice the ones responsible for the vile Galic attack that massacred the Planet Leeds population.

Some of the equipment/products we have been know to export:

BMF has grown to be an industry leader in the Kingdom of Bretonia and our fleet are the front face of the company, each vessel is fitted with a company logo and BMF produced communications and sensor equipment, although BMF does not impose complete control over employees choice of vessel (unless this contravenes company rules) we provide a list as a guideline to the most commonly used ships.

BMF's mining Division is focused primarily on Gold ore, although their mining team, built up of some of the best miners in the kingdom, regularly handle a huge range of other types of projects

BMF Freight ships can be seen carrying out contracts for private companies and individuals all over Sirius. Government mining rights and the location of Fortitudine mean quick and easy runs on Gold mining ops

In addition to their industrial sector Bretonia Mining & Fabrications also has it's own security and escort division, Fortitsec, although BMF do not technically accept contracts from individuals or companies at the moment, they do make exceptions. Although the police and army may seem like far more entertaining careers a pilot with BMF earns more, risks there life less and mainly, has less paperwork to do! there are also plenty of opportunities for fast promotion in this area

As the construction of the Lord MacRae Shipyard is completed this ship line is subject to change in order to face BMF's FortiSec fleet new purposes. 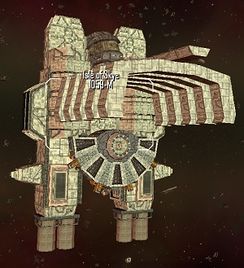 BMF's first space station, named "Fortitudine", was the company's first scientific and productional step, they managed to create the most up-to-date space station with the latest technology and building materials combined with pioneering manufacturing techniques never seen before in Bretonia. Fortitudine now serves as Mining Facility and is the main storage station for all BMF Gold Ore operations and the feeding point for all Bretonia bases.

With the grand opening of BMF's second space station, named "FortiSec", a new era of security for all Fortitudine Miners was initiated. Even though BMF is a friendly and hospitable company, we sadly had to react to some specific threats to fortitude. Every brave man willing to fight for the survival of our families and our hard working miners or willing to escort the transport ships of our contract partners are cordially invited. Also novice fighters are welcome and will get a free fighter ship straight from our FortiSec fleet with basic training and prospective advanced training for the right candidates.

With the acquisition of Bretonia Mining and Fabrication by the House of Bretonia in 826 A.S.. Bretonia Mining and Fabrication begins the construction of its own ship production facility, winch will be at same time the Head Quarters for its security wing FortiSec. With hardships of war times, Bretonia needed another ship production capable corporation, giving BMF a new purpose. Lord MacRae Shipyard construction started in early 826 A.S.