This is a player faction. For the affiliated NPC faction, see Bretonia Armed Forces

The group formerly met under the purview of the Monarch, who maintained a full third of the vote as well as veto power, on the Battleship Harlow.

This relationship has been recently upended. As a consequence of the recent troubles with the Populist Party, the Royalist Prime Minister Worthington, fearing a revolution on his hands, realized that superficial concessions to the Populists were needed, and he has appointed a new Minister of Defence, Royalist James Ralston.

The New Minister of Defense, in turn, resurrected the ancient rank of Fleet Admiral, and promoted Percy Nelles to that position. Fleet Admiral Nelles had a conservative reputation, and was assumed therefore to be safely Royalist. Secretly, however, he harboured admiration for the courage of the Populists and Federalists, and was loathe to add further to their persecution.

In June 817 A.S., following the loss of his arm at the Battle of Stokes and under pressure from the new government of Prime Minister George Mountbatten to make way for a younger candidate, Fleet Admiral Percy Nelles decided to step down from his position and was replaced by Fleet Admiral Sir Stanley Nelson, previously Admiral of the Suffolk Great Fleet. He is faced with the daunting task of halting the Kusari advance towards Planet Leeds and recovering from recent setbacks to bring the full weight of the BAF to bear against the exposed Kusari positions.

The Fleet Admiral now has replaced the Monarch's position on the Admiralty Board, and therefore now enjoys the voting and veto privileges previously enjoyed by the Monarch.

Support and Supplies, and Trading Restrictions

Since its formation in the year 310, the Bowex shipping corporation has almost exclusively funded the BMM construction of BAF warships, and the nationalisation of these two companies has historically increased the prosperity of the Bretonian public in comparison to the other Houses by reducing the strain placed on the public in the form of defence taxes.

For spectacularly obvious reasons, there is a ban against any commodities transferred to/from Kusari as well as a ban on any military-related commodities being taken through the Tau systems. Violators of this embargo shall simply drop their cargo, or be destroyed.

Position of the Queen

Preceding Carina I's rule, the monarch had long been an impartial observer of the Admiralty Board proceedings, maintaining a small defense force in Salisbury and providing the Battleship Harlow as neutral grounds for the politics of the Board. Queen Carina for a time enlarged the Monarch's martial power, beginning with a general increase in the exercise of the veto, using her influence in the legislature, and exercising direct command authority over Her personal Guard, the Royal Fleet. In time, Queen Carina's Royal Fleet surpassed in strength any other Bretonian Armed Forces Military unit.

Bretonian Politics then took a turn for the worse, at least in the assessment of the Royalists, who, acting in concert with the Crown, reacted to the demands of the Populists harshly, effectively banning that party, and in doing so radicalizing the Populist movement, the core membership of which became the Federalists.

To every action there is a reaction, and the angry response of the public, fuelled by Federalist propoganda, surprised the Royalists. Fearing a revolution at hand, the Royalists developed a propoganda narrative designed to assauge the people's anger, and neutralize the threat represented by the Federalists.

In the Royalist narrative presented to the public, there was a grudging recognition that yes, the Queen had overplayed her hand, and that the personal power of the Monarch had to be curbed. The creation of the position of Fleet Admiral was designed to grant the illusion that the Minister of Defense, and through him Parliament, was again firmly in control of the Armed Forces.

Illusion indeed. Because Carina, on the surface once again merely an impartial observer of the Admiralty Board, does in fact still wield tremendous power over the Royalists in Parliament behind the scenes, and as a result, over her Armed Forces.

It is revealing that in spite of the abovementioned "reforms", the Motto of the Bretonian Armed Forces remains "Carina, Regina, Imperatrix!"

Characters are named as follows: 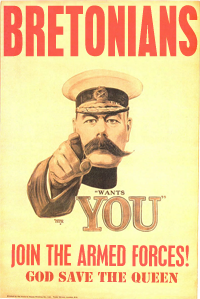 The Bretonian Armed Forces are the shield and sword of the kingdom and the royal protectors of the crown. By the order of the Queen's government and the royal approval of the Monarchy, the Armed Forces are to use all available means at their disposal to protect the people of Bretonia from any harm from foreign or domestic threats.

Their methods of operation include:

All BAF commanders should constantly remind their pilots of these duties, as the job of a BAF pilot is paramount to the continued existence of the Kingdom of Bretonia. 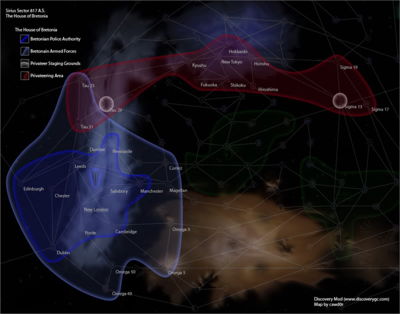 The capital of House Bretonia. New London houses the government, royalty and the heads of the major corporate bodies of Bretonia. It is the most important system of the kingdom, and as such needs to be defended fiercely. Under vigilance from the Battleship Suffolk, New London's safety has been unstable since the fall of Leeds as Battleship York retreated back to Newcastle Jump Gate, More [[Mollys] are raiding the system, as well as Corsairs. However, the most feared threat is the Gallic Royal Navy as The Bretonia Armed Forces carries on regular raids to cripple the Gallic forces there. However, Gallic Forces do counter-attacks into the New London system terrorizing the safety of civilians. .

The breadbasket of the kingdom, Cambridge is a vital system. It lies on the crucial trade route to Rheinland and contains the single largest concentration of farms in all of Bretonia. It is also constantly raided by Corsair pirates, and as such needs particular attention when it comes to the protection of trade traffic within it. The BAF command centre in the system is onboard Battleship Norfolk, strategically positioned near the Ross Planetoid. BAF standing orders are to shoot any and all Corsair ships in the system for the protection of the civilian populace.

While Manchester is a crucial through-way to Liberty for Bretonian trade, it is rather quiet in terms of pirate attacks. Light Gaian and Lane Hacker raids are to be expected, nothing more. Due to this relative safety, Bretonian forces within the system operate from Battleship Suffolk in New London. Only light patrols necessary.

Leeds houses the industrial machine of Bretonia. Planet Leeds itself is home to countless factories and manufacturing facilities, and is thus extremely important to the Bretonian crown. After the Bretonia Armed Forces successfully defending the system, It did not last long until Gallic Royal Navy forces broke through taking control of Planet Leeds, Planetary Resistance is still present and holding. Raids and guerrilla warfare is still commencing in an attempt to cripple The Gauls and supply the resistance on Planet Leeds.

Battleship Derby as destroyed during the battle for Leeds along with the rest of It's fleet. However, Battleship York Fleet was able to retreat with It's surviving warships to the New London system, as it serves as Stationary Headquarters at the Newcastle Jump Gate.

The system of Edinburgh is important for one reason: its planets. Planet Gaia is the lushest stellar body currently known in the Sirius sector, brimming with exotic wild life and freely growing plant life. It is highly sought after as a tourist destination and generates excessive profits for the government through taxes. The other planet, Ayr is currently under terraforming by Planetform, Inc. in an effort to create new habitable places for the people of Bretonia and lead the way in such future endeavours all across Sirius.

Newcastle is a large system housing a number of corporations and a significant standing fleet of the Armed Forces. Due to the amount of forces stationed by the crown there, the threat of piracy is minimal and forces are currently being pulled from Newcastle to assist with Leeds defence against the wicked Kusari invaders. Battleship Ark Royal houses fleet command within the system.

The Dublin system is one of the more troublesome areas of the Kingdom, being the home system of the Mollys, as well as a major source of gold for all of Sirius - thus attracting petty pirates and Corsairs as well. Despite the recent treaty with the official Molly leadership, the amount of piracy and crime in the system has seen a steady increase as the BMM expands its operations there. Due to the growing severity of the pirate problem, the BAF has now been tasked with cleaning up the system under the blessing of the new Molly leadership. They operate within it from the launch bays of Battleship Essex.

Although a lifeless and generally worthless system, Dundee is crucial to the Bretonian war effort due to its position on the galactic map. It is a through-way system to Tau-31 allowing the Armed Forces to bypass the heavily defended jump gate in Leeds, and strike the Kusari forces from the rear. It is currently the stage of a bloody battle between Kusari and Bretonian forces, with the victor being able to claim one of the only two natural ways the Tau systems into Bretonian house space. The BAF admiralty has declared the system as critical, and BAF reinforcements are advised to proceed from Leeds to Dundee whenever necessary to reinforce that flank against the Kusari's. The Dundee front is under command of the Battleship Stirling.

Omega-3, nick-named Snowdown, has long retained its status as a Bretonian protectorate, unquestioned by Rheinland who has its own problems with keeping the unfriendly system of Omega-7 in check. The Cambridge fleet is officially authorised to patrol the Omega-3 system at all times, which they do. Despite the presence however, Omega-3 is a difficult system plagued by pirates of all origins, and large numbers of independent settlers who look at the Kingdom's intentions with clear hostility. Due to this, all Bretonian patrols within the system must be accompanied by a ranking officer to prevent any political incidents with the local populace.

Salisbury is the home of the Bretonian fleet command, and is also the main training area of the Bretonian Armed Forces. The Fleet Admiral resides here, and as such this system is fiercely protected in case of any enemy assassins stumbling upon the jump hole.

Armed Forces pilots can be occasionally spotted in these areas, fulfilling their objectives as necessary.

The Armed Forces are supplied by the Bretonian government with state of the art weaponry comparable if not exceeding the specifications of any other available offensive gun in the Sirius sector. Bretonian ships are specialised and extremely well suited to the tasks that they are built for, traditionally sporting good armour and powerful powerplants, as well as fine agility.

Due to these perks, the BAF has no need for foreign weaponry. A BAF fighter pilot can make use of Splitter and Ultra Sunrail class weapons depending on personal preference and the availability of these weapons. They can compliment such firepower with weaponry provided by civilian contractors such as missile launchers or Debilitators.

Note: The old command structure is available here. We will update this as soon as possible.